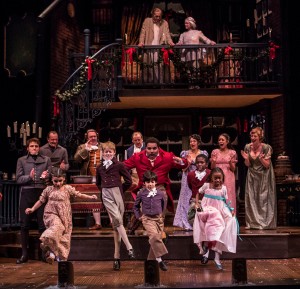 Since Charles Dickens’ novella about the overnight transformation of the crotchety Ebenezer Scrooge was first published in 1843 (right around Christmastime, natch) it has been solidly absorbed into the holiday season, becoming one of the definitive stories of Christmas spirit, embedding itself in our collective thoughts and reminding us of our own Christmases (past, present and yet to come). And for many in Chicago, the annual Goodman production of “A Christmas Carol” (now in its thirty-sixth year) is the definitive Christmas show.

There’s good reason for this—it’s an easily accessible family show filled with plenty of spectacle, a solid (and impressively large) cast and an adaptation (by Tom Creamer) that gives us both comedy and emotional redemption on a grand scale, which the Goodman stage makes even grander. When Scrooge finally does make that turnaround (spoiler alert: Scrooge changes his miserly ways!) this show follows Scrooge’s intent when he buys the biggest prize goose he can find for the Cratchit family: go big or go home.

Director (and Goodman artistic associate) Henry Wishcamper takes the reins of this well-known (and well-trod) show for the first time this year and though he maintains most of the standard aspects that repeat viewers expect, a few notable changes offer improvements to an already solid product.

Larry Yando returns for the sixth time as Scrooge, deftly handling both broad physical comedy and subtle dramatic shifts throughout. When Yando demands of a duo collecting money for a charity organization, “You are asking me to GIVE you money?!?” it’s not anger you hear in his voice but genuine bewilderment. As in, “Do you KNOW who I am?” Yando, with his stooped, tightened shoulders, imbues his Scrooge with a damaged frustration, a type of barely contained rage that is clearly inflicted inward twice as harshly as it is inflicted on those around him. This portrayal allows the audience to more clearly understand how the pain of the past and the fear of the future that may be can bring about such a complete shift in Scrooge’s core makeup rather than driving him more deeply inward. Like some twisted version of “It’s a Wonderful Life,” Scrooge witnesses not how much worse things would be if he had never been born but how happy others would be at his demise. And it terrifies him. 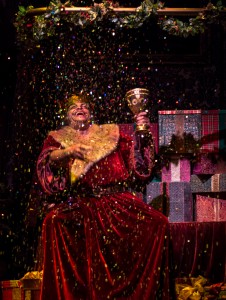 The rest of the cast delivers as well with a few notable standouts. As Bob Cratchit, the endearingly earnest and optimistic Ron Rains is tasked with a good deal of broad comedy of his own. Rains handles the laughs, but also the tear-jerking moments around the Cratchit dinner table with aplomb. And A.C. Smith as the jovial but forceful Ghost of Christmas Present, clad in a massive red robe and sporting platform shoes to help appear even more imposingly large than he is, steals every moment of every scene he’s in.

The one aspect of the show that needs work (and perhaps I’ll be called a Scrooge myself for pointing this out) is the child actors. As adorable as they are, many of their lines are lost in the open space of the Goodman’s Albert Theatre. Wishcamper might look into a few more discussions on projection for these young actors.

Still, this is a production that knows what its goals are and what its audience’s expectations are. The various technical aspects are perfectly synced: Robert Christen’s lighting design mixes with Todd Rosenthal’s set design to create memorable imagery and illusions. Most notably, the magic of Scrooge’s bedchamber (with its odd angles and hidden inner workings) provides an impressive entry for the Ghost of Jacob Marley (a wailing Joe Foust). But for all its giant set pieces and whiz-bangery, “A Christmas Carol” would be nothing if the central message of doing the most good you can while you can didn’t connect. And, as it has for the last thirty-six years, this one connects. (Zach Freeman)