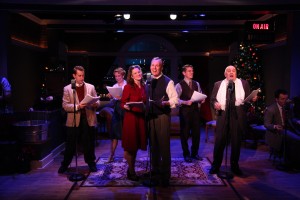 Despite the fact that it’s been a Chicago holiday tradition for more than a decade (first produced in 2002) and its source material is a 1946 film, every moment of American Blues Theater’s current production of “It’s a Wonderful Life: Live in Chicago!” feels fresh and new, with the eager ensemble (led by original director Marty Higginbotham) throwing themselves into the story with so much wide-eyed gusto you can’t help but feel pulled in—into the story itself and into the general life-affirming message of how it is, in fact, a wonderful life.

American Blues Theater presents it as a live radio show in the 1940s and scenic designer Grant Sabin has created a cozy, idealized radio-station recording studio of a set, with snow occasionally falling outside a window and (in case you didn’t know this was a Christmas show) not one, not two, but three fully decorated Christmas trees springing up across the stage. Announcer and pianist Michael Mahler drives the show forward, both narratively and musically, while Foley artist Shawn J. Goudie creates a soundscape that adds depth and texture to the reading. 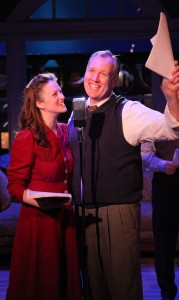 The other six cast members embody the rest of the characters in the story, alternately stepping up to one of the three microphones at the front of the stage to deliver their dialogue and advance the tale of the goodhearted George Bailey (the captivating Kevin R. Kelly) and his dreams and struggles in the small town of Bedford Falls as he tries to keep his late father’s business afloat despite the pressures of conniving businessman Mr. Potter (John Mohrlein, serving double duty on the other side of the goodness spectrum as Clarence the angel).

Catchy jingles for actual Chicago companies are sprinkled into two “commercial breaks” and touching “audiograms” written by audience members before the show are read out as well (a few were so poignant I started to suspect they were pre-written, but afterward a friend told me theirs was read).

The show is uncompromisingly heartfelt and genuine, which risks it coming across as hokey (or even campy) in our rather cynical times. But the story holds up well and, especially during the holiday season, a well-meaning dose of unadulterated optimism is welcome medicine. Running only ninety minutes with no intermission, the show opens and closes with Christmas sing-alongs and the entire audience is offered post-show cookies and milk. This earnest family-friendly production offers the perfect jolt of holiday spirit for audiences of all ages. (Zach Freeman)