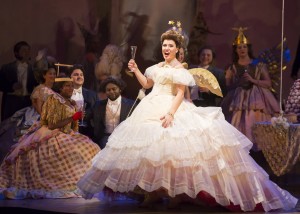 The Verdi bicentennial celebration continues at Lyric Opera with a new production of “La traviata,” Verdi’s most popular middle-period work. As was the case with the new “Parsifal” running concurrently, a stage director with little opera-directing experience was brought in with, alas, similar lackluster results.

Despite having presented “traviata” fourteen times in the company’s nearly sixty-year history—including Maria Callas having made her American debut in the role at Lyric in its opening season—this is the first time, we are told, that Lyric is presenting a complete “traviata.” Go figure.

Act I begins contemplatively enough, Violetta shown in profile preparing herself for her big party while the prelude is still being heard before the scrim is lifted to reveal an odd —by operatic standards—small party in front of a semi-circular background.

Latvian soprano Marina Rebeka, making her Lyric Opera debut, sings her familiar music gloriously with a seamless passaggio between her chest and head voice throughout the act. She is charming and girlish when she needs to be, yet introspective for her glorious solos that close the act. She sings “Sempre libera” with enormous vocal and dramatic freedom, as written without the interpolated high E-flat at its end, yet makes the climactic high B-flat so spectacular and so much the center of the vocal line as Verdi intended that it truly is not missed. 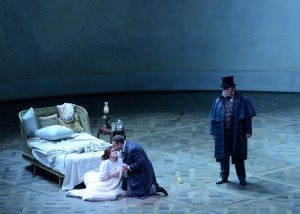 Maltese tenor Joseph Calleja, who had sung Alfredo here for his Lyric debut in 2007 as well as a spectacular Rodolfo last season, is coming into his own with this role with a much more memorable portrayal this time around. His ever-present vibrato will not be to everyone’s taste, but there is Mediterranean sunshine in his voice. More to the point, his acting has improved and he has wonderful chemistry with Rebeka so that we can actually buy that Alfredo and Violetta are in love. Their Act I duets are the highlight of the evening.

Act II is unable to maintain the momentum generated by Act I, at least on opening night. Hawaiian baritone, Ryan Center alumnus and Lyric favorite Quinn Kelsey looked and sounded stiff as Germont, Alfredo’s father, a mature man of the world who comes to Violetta and asks her to give up his son to save the family name and allow for his daughter’s marriage to an aristocrat. Kelsey certainly sang the role with aplomb, but he looked and acted far too young in the role and has yet to find the character’s heart. Like Violetta, Germont must be world-weary and charming, actually taken by Violetta and, in a sense, able to out-charm her in getting his way by convincing her to leave his son. He needs to be empathetic but here is actually brutish, even hitting his son at one point in a bit of gratuitous staging that upstaged Alfredo’s own physical humiliation of Violetta.

Flora’s party is visually more interesting than Violetta’s with all of its lanterns and puppets, but it still seems cramped. And yet, thanks to Michael Black’s superb chorus, much like Violetta’s Act I party, it sounds like a larger party than it is.

Italian conductor Massimo Zanetti keeps things together but the variety of moods that this music can convey seemed a small palette. (Dennis Polkow)