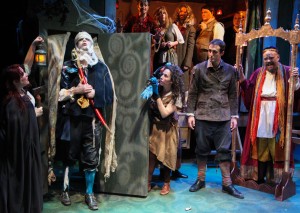 For anyone who’s ever pined for a movie star from a past era or maybe got a little too turned on by famous figures in history class, “The Dead Prince—A New Muzical” just might be the show for your deceased-person desires. The rest of you however probably won’t find the Strange Tree Group’s new tuner quite as zany as that substitution ‘z’ suggests.

The musical begins with a troupe of forest-dwelling storytellers (led by Elizabeth Bagby) tumbling out of their gypsy caravan to proclaim just how eager they are to deliver the evening’s fairy tale. They then proceed to sing about getting ready to tell the story instead of, you know, just actually starting to tell the damn thing. Once the group finally gets that initial song out of their system, the audience is introduced to Sara (Ann Sonneville), a past-her-prime princess desperate to find the right man to help rule her kingdom. Joined by her doting, bushy-haired, mandolin-totting minstrel (Zachary Sigelko), Sara sets out on a last ditch effort to land herself a prince by seeking the help of a magic mirror named Maldorf (Michael Thomas Downey), who—bad news for Sara here—reveals that she can never be with her true love because the dude is already dead. At one time a powerful wizard who cheated death by concealing himself in the mirror, Maldorf strikes a deal with Sara: if he leads her to the deceased prince’s tomb, she’ll crack the mirror and set him free.

And so the adventure begins as the trio embarks into a dangerous enchanted forest (the small space is nicely decked out with spooky hanging branches by set designer Joe Schermoly and doused in creepy lighting by Becca Jeffords). Armed with a bevy of guitars, fiddles and ukuleles, the narrator and her overly goofy gang follow along to sing about the group’s path ahead. Composer and lyricist Emily Schwartz has crafted some pleasant enough travel tunes, but the songs are too frequently dominated by the narrator and her co-storytellers, and don’t allow the princess and other characters to sing out on their own enough. 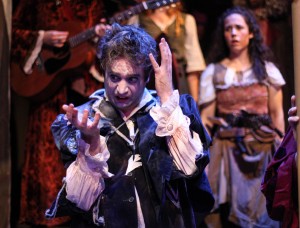 During their excursion the group faces a number of perils like packs of vicious bats and a creepy, tongue-speaking elderly woman. Unfortunately the forest is just a little too over-populated. Sara and her gang eventually cross paths with a conniving thief named Leopold (a comically confident Dan Behrendt) who’s caught in a bear trap. Upon his release he opts to join their quest only to be chased after by Tasha (Kate Nawrocki), the daughter of the man he was stealing from… who then also decides to come along for the journey. Despite some fun moments, the duo’s story never really adds up to anything substantial and often takes the focus away from Sara’s mission. Even the ever-present group of narrators has a few too many members in its gang. While the ensemble occasionally serves as clever human scenery (turning themselves into trees or running around with bird puppets), they’re constantly left looking bored and unsure of what to do. With nothing better to do they even occasionally park themselves on the floor to watch the story unfold like child audience members.

The musical finally kicks into gear once Sara arrives at the tomb of her dearly deceased Prince Adam. Upon reciting Maldorf’s magic spell, the tomb flies open but Sara doesn’t quite get initially swept off her feet like she’d been hoping. Rather than being greeted by a studly knight in shining armor, out walks a bumbling, barely reanimated corpse more reminiscent of Frankenstein than Fabio. Thankfully this is when the show becomes much more amusing thanks to the humorous slapstick performance of Scott Cupper. Twirled in mummy bandages and doused in white chalk, Adam can barely walk three steps, let alone walk Sara down the aisle. Bulging with the goofy wide-eyes of Stan Laurel and moving like the Tin Man if Dorothy had never given him an oil-change, Cupper flails and spasms along in an impish manner as he tries to rehabilitate himself to the mortal world.

For adult audiences it’s pretty clear where the story is headed (those narrators even poke fun at its obviousness), but the musical takes a surprisingly welcome dark turn that might frighten youngsters when the spirit of death itself emerges pissed off that Sara has taken back one of its victims. When all the chaos gets resolved, the show leaves its young audience with a nice little message that true love is more about finding a best friend you care about spending all your time with rather than a royal specimen suited for the shallow Disney version of happily-ever-after. (Michael Mellini)