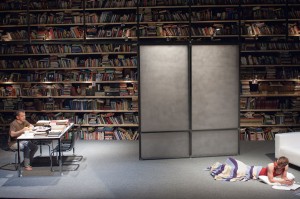 With Illinois signing gay marriage into law this month, the crumbling gay community at the center of Larry Kramer’s 1985 play “The Normal Heart” is almost unrecognizable to a new generation. In the thirty years that have passed since the early days of the AIDS crisis, societal acceptance and medical advances have obviously improved immensely, and Kramer’s harrowing play is a must-see testament to the staggering progress that has been made. The TimeLine Theatre Company’s rousing production will serve as a fascinating history to a younger audience fortunate enough to not live through the horrific time, and for those who did, a chilling reminder of the initial ravaging destruction by a virus that has since claimed more than thirty-million lives globally.

Chicago’s big-gun director David Cromer is back on the stage as Ned Weeks, a hotheaded Manhattan novelist/playwright/screenwriter based on Kramer himself. Alarmed by a New York Times article reporting a rising number of homosexual men dying from a new “cancer,” Ned teams with stern polio-stricken doctor Emma Brookner (Mary Beth Fisher) who’s desperate for gay men to wake up to the disease’s rapid spread and likely contraction through sexual contact. Constantly confronted by indifference and red tape from politicians and journalists not wanting to get their hands dirty with a gay cause, Ned and his fellow group of gay activists face an immensely staggering up-hill battle. The gay men he seeks to save are even skeptical of his message due to his call for community-wide celibacy.

Ned isn’t concerned with spreading his warnings in any soft-mannered way, and Kramer’s dialogue is filled with such urgency, each sentence sounds like it’s written with seven exclamation points at its end. Cromer pulsates with spectacular fury as he unleashes his guns-blazing arguments, yet for all the shouting and emotional fireworks the role requires, he preaches his rabid sermons with a sense of true passion and concern swelling deep from within a complex man rather than just spouting maniacal incoherence as he’s oft accused. 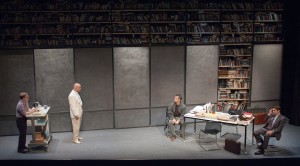 Ned’s many rousing call-to-action speeches are certainly powerful (Fisher also gets to howl one hell of a tongue lashing when she learns her medical research has been denied funding), but the show’s more subdued, somber moments deliver the true gut punches. Constantly gathered around a table fighting for their cause, the supporting cast of activists (Joel Gross, Stephen Rader and Alex Weisman) creates a friendly, welcoming environment for the audience even when they’re at each other’s throats. But surrounded by the accelerating death of their friends, burdened by a relentless work schedule and struggling to make sense of the little information known about the disease, the men battle to keep their sanity and strength, and each one delivers emotional stories about their interactions with those affected by the virus. Keep those tissues handy: the grim details will leave you melted to a puddle in your seat and each tale is only worse than the previous.

Statistics and death tolls are rambled off so frequently throughout the play that it would be easy for audiences to eventually go numb to the staggering data of doom. Kramer however keeps a relatable emotional spark burning with the love story between Ned and his boyfriend Felix (a charming Patrick Andrews). As the play’s title suggests, despite the disapproval of much of the outside world, these men have found a passionate connection amid a horror story setting.

Designer Brian Sidney Bembridge has littered the back of the intimate production’s stage with sprawling bookshelves stacked ten shelves high that suggest a salute to the wealth of knowledge stirring in Kramer’s head. His minimal lighting also allows for the dark events of the play itself to dictate the eerie mood. Projection designer Michael Stanfill fills the pauses between scenes with amusing, if occasionally obvious, clips of the era’s popular TV shows, headlines and other culture.

“The Normal Heart” certainly isn’t an easy play to sit through, but it’s one of the few modern plays that truly deserve the branding of essential viewing due to its power to stir theatergoers with a desire to fight for social causes, both present and future, needing attention. (Michael Mellini)