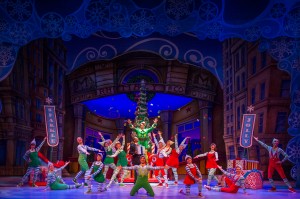 This family-friendly 2010 Broadway adaptation of the 2003 film “Elf” is basically a high-octane song-and-dance version of the story of Buddy the Elf that has plenty to keep all ages entertained, from small children to seniors.

Lacking the wryness and special effects of the film, this musical version nonetheless boasts a witty book by Thomas Meehan (“Annie,” “The Producers,” “Hairspray”) and Bob Martin (“The Drowsy Chaperone”) which does develop, update and smooth over plot details that compress the story in a more genre-friendly way for the stage.

In the musical version, it is Santa—played by Ken Clement—who tells the story, engaging the audience with local color and witticisms and even a song or two. The biggest loss from the film is that Buddy, played by Will Blum, is really no larger than the other elves, so in that sense we do come to accept him as, well, an elf, rather than a human being raised as an elf.

That did not seem a distracting plot detail, however, as we quickly come to accept that Buddy is different, a difference that thanks to Blum’s consistent performance, rides a fine line between annoying and likable. We do come to cheer Buddy on in his exploits of discovering the world of New York as well as the pleasures of family and romance. Lest we ever start to think it is some semblance of a real world that Buddy is inhabiting, a retro song by Matthew Sklar and Chad Beguelin comes along to dispel that notion and, before long, the ensemble is joining in both singing and kicking up a dance line, thanks to splendid, if very traditional, choreography by Connor Gallagher. Even the New York City that we experience in the show is really more of a Rockettes-like New York.

Some of the best such moments in the show have very little to do with Buddy explicitly, such as “The Lemon Drop Kid”-inspired Act II opener “Nobody Cares About Santa” which features a bunch of out-of-work department-store Santas on Christmas Eve reflecting on the quick slide from popular holiday icon to solitary unemployment.

There are good messages that emerge in Buddy’s surreal journey, lessons that definitely seek to downplay the commercial aspects of holiday exploitation, particularly of workers, as well as emphasize the importance of family and loyalty. The sets are colorful, the performances all topnotch and overall, this is a feel-good holiday show that really does make you feel good. (Dennis Polkow)