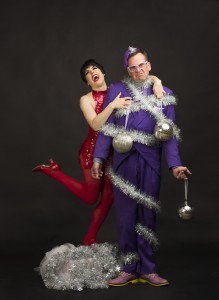 Chicago theater during the Christmas season is plentiful. Add to this growing list an “out-of-the-box, not your typical fare, wild, crazy, gay fantasia,” as director Scott Ferguson describes his show “We Three Lizas” which recreates “A Christmas Carol” using Liza Minnelli impersonators as Liza Was, Liza Is and Liza the All-knowing. This ninety-minute, fifteen-song holiday show is now in its second run and includes the original cast as well as a few new players.

Featured at the Steppenwolf Garage last year, and in New York over the summer, this annual show first appeared as a “gay parody, retelling of Hammerstein’s ‘Oklahoma.’” It was a huge success. “But then they wouldn’t renew the permission,” says Ferguson. So with the seed planted, but new material needed, writer Scott Bradley immediately thought about Liza. “Christmas is redemption stories: ‘It’s A Wonderful Life,’ ‘The Grinch,’ the ‘Gospels’ even; there is a magic in it, and what it means to us as Americans and queers.”  Unanimously, when Bradley pitched the idea of Liza, it was a hit. “Liza is the last of show-biz royalty. She is this fairytale creature—she is a gay icon, great symbol, every time you think she is done, she reinvents herself. Such wonderful material for the show,” Bradley says.

Actor Danielle Plisz, who plays Liza Is couldn’t agree with Bradley more, “I’ve heard she walks into a room and the room lifts up.” Plisz has taken her Liza role and developed a one-woman show, “When I’m in role, I do get the comments about how much I look like her. She was the first concert I went to, when I was twelve.” Plisz says that being an artist means looking up to Liza. She admires Liza’s take on reality: that it is there for the recreating. “I come off stage, and I think, ‘Oh my god, all of the singing, and dancing, at breakneck speed!’ Liza gives 110 percent every time, and that’s what I’m trying to hold up to.”

Unlike Plisz, Bradley met Liza Minnelli some twenty years ago, first in New York. “She was young, fabulous, the mood became bouncy, with great lightness and joy when I met her at an after-party.” Bradley lamented about his time in New York, during the holiday shows, adding, “Everything is big. Tourists. It’s such an enormous scale, it’s not very attractive.” So when Bradley had the chance to come to Chicago, he thought about, “Intimacy. This is Chicago. We all want to do shows here. The cocktails, the warmth, the spontaneity of the audience.” Add to this Chicago theater scene the idea that Liza represents as a cult hero for a lot of popular culture, and Bradley was hooked.

The show is about box-maker Conrad Ticklebottom, who was something of an art phenomenon. He suffers through some lonely ruin during the holiday season, and it takes the appearance of the three Liza’s to shake his world up. This holiday musical, “was thrown together last year in three months, writing lyrics without songs. It was a sold-out run then, so the time we’ve had this year to remake this show—it is basically a new song-and-dance show—has been wonderfully productive,” says Bradley. “The lyrics, music and dance pay tribute to Liza and that Chicago jazz, cabaret style,” Ferguson adds. “You learn a lot that first run-through. A lot of writing on the spot, hearing the audience response and what works; this time it’s a stronger script, clearer story, the stories are better. It’s a true holiday musical that will knock people’s socks off and make them think at the same time.”