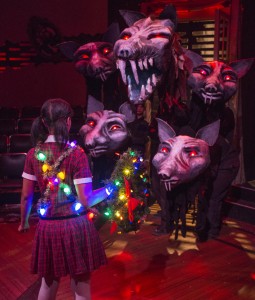 Christmas merriment is in full swing at the home of young Clara and her family in the fantastically staged opening scene of The House Theatre’s musical retelling of “The Nutcracker.” Twirling in a dizzying array, Clara, her parents, the eye-patched Uncle Drosselmeyer and their party guests exuberantly dance around the shiny Christmas tree (accompanied by a surprisingly lush four-person orchestra) as they eagerly await the holiday homecoming of Clara’s soldier brother Fritz. The good cheer, however, comes to a screeching halt when another soldier makes a chilly entrance instead, bearing a folded American flag. It’s an incredibly intense moment for a children’s show, but the production wisely trusts its young audience to come along for a more somber take on the beloved holiday tale that will pay off in heartwarming, if not emotional, ways.

Fast-forward to a year later and grief is still shackling Clara’s (Paige Collins) home. Drosselmeyer (Karl Potthoff) arrives unannounced a week before the family’s annual Christmas bash, only to disappointingly learn that this year’s party has been called off. It’s clear not all is right in the home as Clara’s parents (Benjamin Sprunger and Brenda Barrie) seem emotionally disconnected and unwilling to acknowledge the holiday season in any capacity. Worried about his young niece, Drosselmeyer gives her an early Christmas present: the eponymous Nutcracker.

The piece strays from the ballet’s standard narrative here, as rather than magically becoming a strapping future love interest for Clara, the wooden doll is modeled after her deceased brother. Soon nutcracker Fritz (Kevin Stangler) magically comes to life, along with three of Clara’s other toys: a sock monkey (a sneering, French-accented Johnny Arena), a moppy-haired rag doll (Christine Mayland Perkins, playing doll cuteness to extremes) and a lightbulb-headed metal nerd named Hugo (Jason Grimm). Together they recruit Clara to bring some Christmas cheer back to the home, first by whipping up a midnight batch of her mother’s famed sugar plum cookies.

The show understandingly has to appeal to its younger audience; however, in contrast to the musical’s serious theme of familial loss, the “fa-la-la-la”-filled number “Let’s Bake Cookies” dips a little too drastically into juvenile territory.  Waking up to Clara making a mess in the kitchen, the adults are concerned she’s acting out in some emotionally damaged way and are nervous about how the nutcracker toy is affecting her. Clara is allowed to keep the toy though, and the next time he comes alive the group encounters a pair of evil rats (Sprunger and Barrie double as the rodents, speaking in goofy British-mod accents) who warn of the impending arrival of the Rat King, a vicious beast who will do anything to stop Christmas. 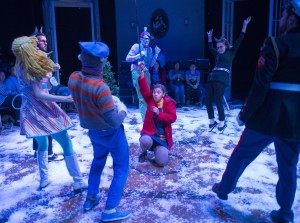 Performed in the round, the show is at its most fun during its action scenes as Clara and her co-horts chase the rats back and forth through the stage’s five large doors. Director/choreographer Tommy Rapley has the group moving at such a manic pace that those English rats might as well be accompanied by the “Benny Hill Show” theme song.

Rather than getting transported to a magical land filled with different dancers hoping to entertain Clara and her nutcracker, the show continues with Clara’s efforts to bring joy back to her family. These occasionally dull (for adults at least) tasks include chopping down a backyard tree (although entering the outdoors provides a surprising, fun explosion of snow that children can roll around in during intermission) and trying to break out the Christmas decorations from the attic. It’s during this final task that Rapley pulls off some stage tricks that will terrorize not just the children, but any audience member who’s ever found unwelcome vermin in their home. Scenic designer Collette Pollard’s walls burst open with rats as their five-headed ruler comes to staggering life, doused in the blood-red lighting of Lee Keenan, ready to stop Christmas once and for all.

In the end, all the family drama gets wrapped up nicely like any good Christmas present. Most holiday shows may not put their protagonist through the wringer quite like Clara, but her story will provide young theatergoers with a reminder to cherish the family members who brought them to the production. (Michael Mellini)