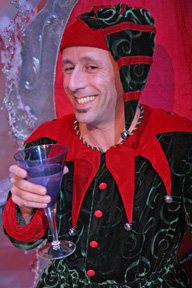 “I am not David Sedaris, ” Mitchell Fain notifies his audience at the start of “The Santaland Diaries,” the stage adaptation of the famed author’s popular holiday essay. Fain then instantly cracks a joke about Sedaris’ distaste for the theater piece (but how he has no problem cashing the royalty checks every year), and it’s clear you’re definitely in good hands to hear all about the humdrums of working the holiday season.

Now in its tenth year at Theater Wit, “The Santaland Diaries” begins with the down-on-his-luck forty-seven-year old answering a want ad from Macy’s seeking “elves” to work the seasonal Santaland Christmas display. The only thing more depressing than applying for the job? Fain’s realization that he might not actually get hired! Fain proves to have the magic charm required to lead kids to Santa’s giant chair (at least to the apathetic HR interviewer) and is taken on staff. Packed into a windowless room for training, he selects the elf moniker of Crumpet and begrudgingly takes in all there is to learn about inhabiting the life of Santa’s little helpers (no you can’t take your costume home!)

While Fain gets to begin the piece sitting on a stool in casual jeans and a cardigan, he soon scrambles backstage to slip into his embarrassing elf uniform: candy-caned stockings, pointed toe slippers, a green velvet tunic with jester-esque trim and a big floppy hat. As he begrudgingly stomps out on stage, he then pulls back the stage’s simple red curtain to reveal the yuletide Santaland set. Designer Joey Wade has decked out the stage with festive giant nutcrackers, dangling icicle lights, Macy’s signature “Believe” logo and a white Christmas tree. It’s hard not to feel an initial gust of emotional whimsy in the moment despite the text’s Scroogeyness.

Bulging his eyes out and aggressively traversing across the stage, Fain hilariously dishes on his experiences at Macy’s, ranging from the obnoxious (parents directing their child’s photo op to Scorsese-ian lengths), the bizarre (single adult men showing up to chat with Santa about their love of toys), the casually racist (shoppers not-so-sly attempts to ensure their kid is greeted by a Caucasian Santa) and the just plain unsanitary (parents instructing kids to pull down their pants and urinate in the fake snow banks).

Fain delivers his anecdotes not with the seething bitterness that could so easily inhabit someone working this soul-sucking job, but rather the opposite. Armed with a glass of white wine, he spits out his words with the excitement and eagerness of a witty boozehound who’s just arrived to a crowded happy hour with full confidence that his stories will provide his drinking buddies with the evening’s best entertainment.  He also thankfully has no problem meandering from the text, occasionally pausing to harass audience members and, at the reviewed performance, humorously going off on the absurdity of twelve adults crowded around on the floor during a recent rehearsal trying to fix the set’s broken tiny toy train. Fain even keeps the material fresh by adding quips about Lady Gaga’s Muppet holiday special and Cher’s recent Twitter bashing of Sarah Palin.

The eighty-minute show breezes by faster than all those verses of “The 12 Days of Christmas.” Whatever stresses the holidays may bring to your own life, a visit with Fain will make for just as satisfying a treat as a few swigs of eggnog. In fact order one at the lobby bar, Fain will raise his glass right beside you. (Michael Mellini)