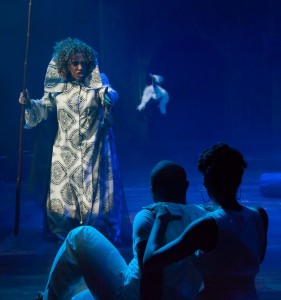 Playing at the Black Ensemble Theater in Uptown, “Once Upon A People” is the perfect antidote to the same old same old that can plague the holiday season. No offense to the traditional, but it would be a real shame if this new African fairy tale fell under the seasonal theater radar. Written by Rueben D. Echoles, “Once Upon A People” is a lot of everything that the Black Ensemble Theater does well. Dance numbers are choreographed beautifully and the voice talents on stage are simply amazing. The production also features the inspiring young talents of the Studio One Dance Theatre (a South Side organization dedicated to exposing children to the arts). Even the pre-show warmup act is genuinely entertaining as actors stroll down the aisles hawking their wares. On opening night, by the time they got to me and my ten-year-old daughter I was tempted to reach into my pocket to purchase a flower. Luckily it was on the house.

Unlike some other recent Black Ensemble productions, the story here is more than an excuse to hang on some musical numbers. In the mystical land of Mirah, two reluctant lovers, Prince Oba (Eric Lewis) and Princess Erin (Jazelle Morriss), must face a vengeful witch intent on destroying their kingdom. Although at times the plot seems a little too similar to “Sleeping Beauty,” it is nuanced enough to keep the audience engaged. It also offers up a clever plot twist that I have yet to see in a fairy tale. Another surprise is how dark parts of the second act are. Not too dark, mind you, but darker than one would expect from a family-focused play. But just when it seems that the kingdom of Mirah is surely doomed, love and forgiveness are able to triumph over evil. This, of course, gives the citizens of Mirah reason to dance and sing the night away, which are two things this kingdom happens to do especially well. It would be a shame to miss this holiday show. (Noel Schecter)