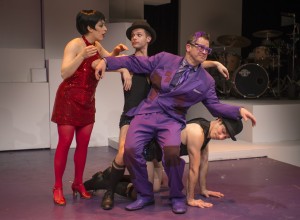 Here’s a recipe for making your holiday season jolly and gay (listen, I knew there would have to be a gay pun in here somewhere so I figured I’d get it out of the way right at the start): Take Dickens’ uber-classic “A Christmas Carol” and add a pinch of Macbethian witches, a dash of song-and-dance numbers, a splash of purple and a whole lot of Liza Minnelli. Stir it up with a dynamic cast of singers and dancers (with choreography by Patrick Andrews), a live four-piece band and a large, boxy, morphable set (courtesy of Jerre Dye). Then sit back and watch the surreal redemption tale unfold.

This “fairy tale that fairies love to tell” is written by the undeniably funny and talented Scott Bradley (of “Carpenters Halloween” and “Alien Queen”) with music and additional lyrics by Alan Schmuckler. And though it follows the basic framework of “A Christmas Carol” (Christmas season, grouchily irredeemable protagonist, three spirit guides, etc) it also veers off wildly from the original structure (with welcome, if rather muddled, results).

In “We Three Lizas,” designer Conrad Ticklebottom (About Face artistic associate Scott Duff) is a washed-up has-been whose glory days are behind him. Once the toast of the design world, he’s no longer seeing any commercial interest in the product that bears his name: a solid purple box known as the Conrad Box. As he hurriedly works on a slapdash Christmas commercial, we’re confronted with the tenuousness of his situation by his harried assistant (a fantastically animated Dana Tretta), a demanding consultant (the dazzling Sharriese Hamilton) and a group of mysterious witches. Turns out, like old Ebenezer, Conrad has some accounting to do for his life and his current desperate situation. Enter the titular Lizas. 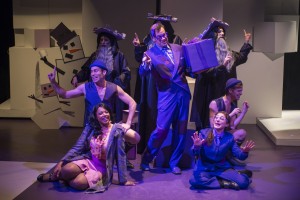 Rather than three ghosts, Conrad is confronted with Liza Was (Danielle Plisz), Liza Is (Mark David Kaplan) and Liza Always (Bethany Thomas). Each of these Lizas brings a different sort of Liza-ness to the character and each is magnificent in their own way. As Liza Was, Plisz captures the excitement and devil-may-care wildness of Liza from the 1970s with a naturalness that is exciting just to witness. Her enthusiasm and boundless energy is catchy. It doesn’t hurt that she bears a striking resemblance to Ms. Minnelli. The way she belts and dances to the song “I Can’t Believe I’m Me” is one of the high moments of the play. Kaplan follows her up with Liza Is, an older, more haggard Liza who maintains the same sense of wonder about the world, albeit countered with a bit of world-weariness (and a much deeper voice). But in terms of sheer vocal accomplishment, Thomas’ Liza Always blows up the stage with her incredible singing chops and vocal range (along with a hilariously odd prop to represent the eternal Liza). These three Lizas make you wish for more Liza-ness in an already Liza-heavy production.

Along the way we learn that Conrad (portrayed as a young man by the charmingly sweet Andrew Swan) once had a true love named Beau (John Francisco) but that he lost him to his own greed and desire for fame and fortune. The moments between Swan and Francisco are truly touching, especially in a show filled with silly (albeit catchy) songs like “Balls To You” and “Give It A Christmas Goose.” But there’s a focus on commercialism that takes away from the more emotional aspects of their relationship. 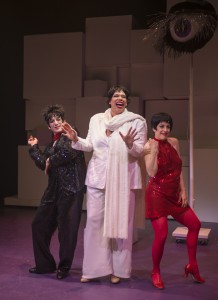 And that’s the biggest problem with the narrative as it stands: Conrad doesn’t seem to be fazed by much that is revealed to him by the Lizas over the course of the show, up until he overhears a conversation regarding the possibility of him being let go from his job. After this discovery he makes what appears to be a sudden 180, changing his demeanor, his ideas and even his whole commercial plan (and making an awkwardly unlikely call to Beau—how likely is it that that guy has been waiting around for a call from Conrad after all these years?) at the drop of a hint of being unemployed. This about-face is welcome but feels wholly calculated when it should feel emotionally resonant. All the proper pieces for a more emotional turnaround are there in Bradley’s script, they just need to be slightly refitted.

Director Scott Ferguson has a good show on his hands and he handles his cast well, playing to everyone’s talents and incorporating Andrews’ choreography in a (mostly) seamless way. This is the second time this show has graced Chicago stages and Ferguson says it’s even better this time around (the space at Stage 773 is certainly more conducive to the production than the Steppenwolf Garage). It’s definitely a fun show to watch, but there are a few more tweaks to be made before it reaches its full potential. (Zach Freeman)