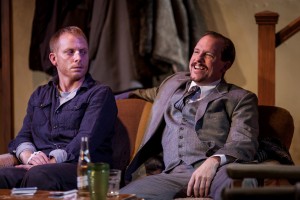 The devil sure knows his way around Chicago. Besides the usual mixture of gang violence and Rahm-style politics, Satan has been a feature of many recent stage productions, including his recent stint in The Gift Theatre’s “Broadsword.” What makes this production different is that, in this play, Lucifer is introduced into a classic Irish gothic play (the type where the characters spend a lot of time talking about leaving the house but instead mostly just drink).

Directed by Matt Miller and written less than a decade ago by Irish playwright Conor McPherson, “Seafarer” presents a world where you can learn a lot about a character by the drink they choose.  There is the loud American type (played by Shane Kenyon). He is a Miller guy. The flawed hero of this tale, Sharky (Dan Waller) is taking a break from the booze. His older, blind brother Richard drinks whatever he can get his hands on (and also seems to enjoy reminding Sharky that he is a lousy drunk). Ivan, their drunk, mutual friend, is also not very discriminating about what he drinks. In fact, much of the first act is spent setting up the sheer wretchedness of the situation as they all prepare for a Christmas Eve get together that culminates in a certain someone coming to play a couple hands of poker and collect on a few debts.

The devil is in the details and I rather like McPherson’s idea of him as a powerful but jealous, almost pitiful demon.  Played well by veteran actor Kevin Theis, the devil here is commanding when he needs to be and weak when the script calls for it. Pitted against Satan is the deeply flawed Sharky. Waller puts in just the right amount of vulnerability. The play is at its best when stripped down to just those two actors.

What surprised me the most about this production were the strong religious undertones. The devil here repeatedly alludes to the holy nature of Christmas. His description of hell, being trapped in a cold grave under the darkest sea where you are always waiting (hoping) to just die, almost made me go straight to temple after the show. And the ending, which I will not ruin, is dripping with redemption. It is as if the “Devil Went Down to Georgia” was reimagined as a sermon. This is a Christmas mass worth attending. (Noel Schecter)