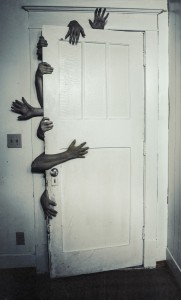 Sometimes the title of a show can give you some clear direction as to its content (“Death of a Salesman, ” “Hedwig and the Angry Inch, ” “Conversations on a Homecoming”). Other times the title is intentionally opaque (“Blood on the Cat’s Neck, ” “Pink Milk,” “Simpatico”). But sometimes, oh sometimes, the title of a show can literally tell you exactly what that show is and exactly what’s to be expected. Up until this weekend I thought “Old Jews Telling Jokes” was the best example of this last kind of show I had seen. But Bucket List Productions and Room Escape Adventures have done them one better with “Trapped in a Room With a Zombie.”

What happens in this show you ask? Come on, you don’t really ask that do you? Not with that title you don’t. But I’ll give you the rundown anyway. In this interactive production you (and up to eleven other people) find yourselves locked in the laboratory of a brilliant doctor whose latest experiment has gone horribly awry, resulting in her transformation into one of those undead things we’ve heard so much about over the last few years. And she’s hungry and searching for fresh meat. Luckily for you and your group, she’s chained to a wall and has a very limited reach. However, over the course of this sixty-minute adventure there’s a buzzer that sounds every five minutes, signaling that her chain will now extend an additional foot, giving her further reach into the room and giving you less free room to maneuver your way around.

That last part is important, because your goal for this action-packed hour is to work with your team to tear this room apart and decipher the dozens of clues scattered throughout the space you’re confined in in order to figure out how to unlock the tricky tricky lock that’s keeping you imprisoned. Sound like fun? It’s much more than that. Using a fairly tiny space on the sixth floor of the Fine Arts Building, this little group has taken an inspired concept and turned it into an hour of nonstop mentally and physically invigorating entertainment.

From the minute you step into the space until the minute you step back out (if you’re clever enough to compile all these truly challenging clues while avoiding a hungry zombie, that is) you’ll forget that you’re just enjoying a show and get caught up in the very life-or-death excitement of it all. Within minutes of the show starting I found myself jumping around to avoid the hands of a well-made-up and costumed (and extremely believably portrayed) zombie doctor. I also found myself openly working with people I’d only just met to strategize on how to avoid the zombie, how to understand a series of maddening clues and just what our next step should be.

And that might be the true magic of this production: the escapist scenario takes such hold and is so engrossing that you forget about inhibitions and pre-established groups (for the most part) and just focus on trying to get everyone out alive. In the escape that I attempted, I was in that blasted room with a pair of friends, an outing of six family members and another pair—all strangers to the other groups at the start. As soon as the first clue was found, we were all working together to determine what it could possibly mean. From then on we worked mostly as a team with little subgroups constantly forming and unforming around various puzzles.

Impressively, the creators have assembled a series of clues that are both stand-alone mysteries and connected stories. The zombie aspect is a truly great gimmick (even better than it sounds, really) but the brain games are what makes this show tick. Sadly, my team did not make it out in time. And afterwards, to keep us from lying awake at night wondering what tiny thing we did wrong to prevent our escape we were let in on the secrets of the room. If anyone tries to reveal these secrets to you don’t let them! Go experience this reality quiz show/zombie chase mashup for yourself! (Zach Freeman)