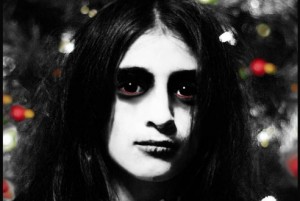 There’s no sleeping in heavenly peace over at Studio BE where the New Millennium Theatre Company’s Christmas zombie comedy “Silent Night of the Living Dead” is attempting to offer up some gruesome holiday cheer. Unfortunately the title is pretty much the cleverest thing about this dead-on-arrival comedy. The ninety-minute, intermission-less show moves at an even slower pace than those slogging zombies, and by curtain call you’ll be groaning louder than the walking corpses.

The play starts with a bloody bang as the zombies violently attack their first victims in a department store. Witnessing the explosion of fake blood and intestinal fireworks live is a fun sight gag that zombie movies and TV shows can’t quite match. However, the gimmick wears thin quickly. I was even splattered with fake blood sitting in the back row, staining a favorite pair of pants I had on (which made sitting through this mess of a show even more infuriating).

“Silent Night of the Living Dead” follows interracial college couple Barbra (a bee-hived Andria Emerick) and Ben (David Guy) as they head to Barbra’s parents’ home to celebrate the holidays. Accompanied by Barbra’s brother Johnnie (William Goff), the duo makes a stop at Barbra’s grandfather’s grave to set down some flowers. During their cemetery pit stop Johnnie is suddenly devoured by a gang of lurking zombies, and the duo rushes back to make sure the rest of Barbra’s family is safe. Upon finding the house empty, Ben goes into emergency mode trying to board up the home to make sure no zombies can enter.

Turns out the rest of Barbra’s family is safe and has been holed up in the cellar with their neighbors, prepping the perfect Christmas dinner. Mrs. Cooper (Sara Wolfson in full old-fashioned Midwestern mother mode) isn’t too thrilled to see her daughter bringing home a black boyfriend, especially one who is now more concerned with saving his own life than celebrating the birth of the “ultimate undead” man Jesus Christ. So Ben tries to reason with Barbra’s father (Donaldson) and their dim-witted neighbor Tom (Joseph White), who’s too busy drowning himself in whiskey to worry about protecting his bimbo girlfriend Judy (Mal Marcus), a joke beaten to death more frequently than those zombies’ heads are pummeled by giant decorative candy canes. By the time dinner is finally served half the family is craving brains rather than the giant turkey sitting on the table.

The show’s occasional funny moments come in between the action when George, a snowman narrator (Sam Brown, speaking with a drawn-out accent from a region so southern no snowman could ever survive) saunters out in Burl Ives fashion. Mixing George Romero’s zombie creations with the yuletide traditions of Rankin and Bass is a sharp idea that sounds good on paper, but would probably be better executed as a ten-minute sketch rather than a full-length production. This is a show that leaves you wondering how so many people could come together (twenty-two creative team members are listed in the program) and at no point did anyone realize it may be best to just pull the plug.

The show features references to “Rudolph the Red-Nosed Reindeer,” “It’s a Wonderful Life,” “A Christmas Story” and many other popular holiday films. Avoid the cold by just staying home to watch one of those classics from the comfort of a couch. (Michael Mellini)