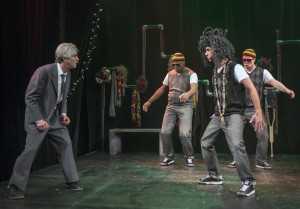 Everybody has a favorite rap song. Currently, mine is “Holy Grail.” I know it is a bit overplayed, but man can that Jay-Z rap. I also like Chicago Shakespeare Theater, which consistently spins the overplayed into gold. Methinks, however, the two rarely meet. But last night they did meet during the warmup to “A Q Brothers’ Christmas Carol” and you know what? It sounded pretty good. It might not work all the time (kind of like swapping out rum for vodka in your eggnog), but now and then it is downright refreshing.

With more flavors than an ice-cream shop, this show brings reggae, hip-hop, old school rap, dancehall sounds and some gritty industrial touches to the old Dickens classic. There’s even a little Blue Man Group thrown into the Ghost of Christmas Future number. Written collaboratively by the four actors on stage (Jackson Doran, GQ, JQ and Postell Pringle), the script may rhyme, but it also stays true to the spirit of the original. The touches they do add (like a loving gay nephew who repeatedly invites Scrooge to his Christmas party) might feel a little contrived, but fit in well with the overall theme of good cheer (otherwise known as Christmas spirit). This is a show that has a lot of fun with the source material (such as giving Tiny Tim every affliction known to man, including scurvy) but does not shy away from being sentimental. The Q Brothers do well at balancing the traditional and non-traditional and in doing so tease together something unique.

Besides writing a clever and witty musical, this quartet proves to be solid actors, dancers and rappers. They also excel at the quick costume change, effortlessly transforming on stage between roles. GQ does an especially good job of making Scrooge more than just a one-dimensional cartoon character. In his hands, Scrooge transforms well from a grumbling old man who likes to wish everyone a “Merry Chris-my-ass” to that of a younger, happier man moved by his discovery of the true meaning of Christmas. You would have to have a heart of coal not to be moved by the transformation. And DJ Super Nova flawlessly provides all the musical backing this production needs. The press release says that this is “a work in progress.” I say bah humbug. This is a production worthy, as it is, of being a new Christmas tradition. (Noel Schecter)