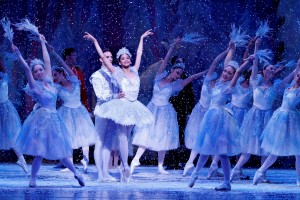 The first images that spring to mind with The Nutcracker Ballet are usually lavish costumes, plentiful fake, glittering snow and a rousing sword fight between a wooden toy and a giant mouse—not necessarily explosive leaps or masterful ensemble staging. And, with well over 100 youth dancers, singers from five different children’s choirs, a massive tree and a two-story Mother Ginger puppet, the Joffrey Ballet’s version of the holiday classic doesn’t disappoint for razzle-dazzle. But despite the parade of lavish sets and spectacular on-stage snowfalls, the real centerpiece of Robert Joffrey and Gerald Arpino’s most-staged ballet is the dancing. The ensemble work in the land of snow is powerful and athletic; in the waltz of the flowers, willowy and lithe, dancer’s limbs moved as if by the breeze, and the virtuosic five divertissements—the memorable series of dancing sweets from around the world—outshines the thirty-foot Christmas tree for awe-inspiring pyrotechnics. There’s something here for everyone, dance fans included. Like eggnog and colored lights, it’s here every year and it’s always good. (Sharon Hoyer)