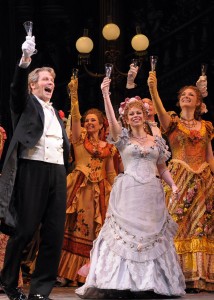 In Vienna, and all over the world, the New Year rings in with productions of Johann Strauss’ “Die Fledermaus.” How appropriate, then, that Lyric Opera is reviving this most popular of operettas for the holidays. The current production comes off as authentically Viennese, directed with great nuance by E. Loren Meeker that bubbles with as much sparkling effervescence as the champagne whose virtues are so celebrated in Strauss’ frothy concoction.

Making a stellar American debut, Austrian soprano Daniela Fally as the chambermaid Adele is charming, funny and sings the role gloriously. She has the audience almost literally eating out of her hand from her first notes.

Also making her American debut and singing her first-ever Rosalinde, German soprano Juliane Banse musters all of the sophistication and humor needed and has a beautiful tone, but appears to lack the vocal agility needed for this role. On opening night, her voice came in under pitch for the finale of Act I and her Act II csárdás was a comedic triumph but a vocal disappointment as she was stiff and vocally inflexible and opted out of the final high note completely.

Dashing Danish baritone Bo Skovhus, who played Eisenstein in Lyric’s 2006 production, reprises that role and continues to relish in the comedy yet sings with lyricism and style. He makes a generally more sympathetic Eisenstein than is customary but his characterization works well.

Making his Lyric Opera debut is tenor Michael Spyres as Alfred, who skillfully rides the line between hammy tenor and flirt in his portrayal, yet never allows his performance to go over the top.

Mezzo-soprano Emily Fons makes a decidedly detached and brashly bored Orlofsky, exactly what this prince of trouser roles calls for. 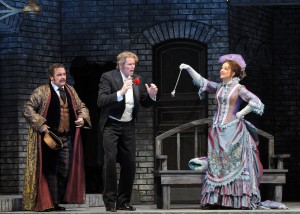 Dr. Falke, the “Fledermaus” (bat) of the title, is sung and acted by Austrian baritone Adrian Eröd with aplomb and Chicago actor Fred A. Wellisch nearly steals the entire show with his hysterical and slothful portrayal of the non-singing role of Frosch.

The Act II party is a fun affair and the Lyric Opera Chorus under Michael Black look to be having a great time and make wonderful guests, commenting on the action like a jovial Greek chorus. There are no singing diversions as is often the case but instead the party entertainment is a troupe of lively dancers cleverly choreographed by Daniel Pelzig to other Strauss pieces. The contrast works quite effectively.

Former Lyric principal trombonist Ward Stare conducts his former colleagues with energy and enthusiasm, even if the sparkle and lilt that this music needs to work its full magic has yet to be apparent. Nonetheless, this production is a real triumph for Lyric Opera and a very special holiday experience not to be missed. (Dennis Polkow)