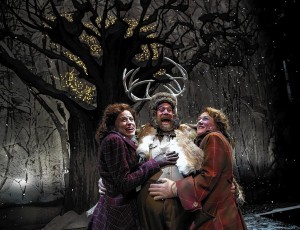 There is a grim and calculating excess at the heart of Barbara Gaines’ version of “Merry Wives of Windsor, ” overwhelming the music of the playwright’s words and leaving in its place something hard and loud and exhausting. In attempting to popularize Shakespeare’s relatively slight but charming riff on bourgeois life, she has reduced it to one long dirty joke. Worse yet, she has done badly by Sir John Falstaff (a misused Scott Jaeck), turning him into a crotch-grabbing yahoo whose goal seems not so much to have his way with Mistress Ford (Heidi Kettenring) and cuckold her wealthy, jealous husband (Ross Lehman), as to earn a spot on the Elizabethan version of “Jackass.”

As usual with CST’s productions, the externals—especially Susan E. Mickey’s costumes and James Noone’s clever indoor/outdoor set—are little short of perfect. However, they serve mainly to highlight the production’s deficit of purpose and soul. Real theater does more than look pretty; it breathes and flows, thus drawing the audience into its temporary world. But this overdone, trying-too-hard production is as flat as a TV screen and about as evocative as a beer commercial.

As the play begins, we are presented with a Shakespearian “Christmas Carol,” complete with an elaborate backdrop that looks like the inside of a snow globe. The fashions are those of mid-1940s England, but this is a postwar Britain without rubble, rationing or a vanishing empire— in other words, without a trace of reality. It’s a handsome but empty visual cliché, a fit background for the production’s array of one-note characters.

The script has as much authenticity as the setting. When she’s not throwing in Andrews Sisters-era pop tunes, Gaines is sacking and pillaging the play’s language, as when Falstaff describes Master Ford as having “shitloads of money.” It’s a rough modernization indeed of the original line, “he hath a legion of angels.”

True, the caricatured Falstaff of “Merry Wives” hardly matches his earlier incarnation in “Henry IV,” but here, amid the pratfalls and general grossness, we get nary a glimpse of his still-potent warmth and charisma. The essence of Falstaff is his injured but resilient dignity, restored every time from the wreckage of his foiled schemes. Falstaff verges on a clown, but remains a knight. The world is a toy for this overgrown child, and in the end he plays those who think they are playing him. 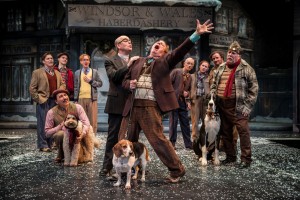 Here, the lovely balance of Falstaff’s character is lost amid the gimmicky, gag-heavy staging. The director’s philosophy is that if one dog on stage is good, three dogs must be three times as good. But of course nothing gets tedious faster than too much fun. Character, theme and texture are sacrificed to the production’s farce-inspired pacing and vaudeville humor. Amid the endless busyness, too little actually happens.

And that’s too bad, because this play has its meanings to be mined. Underneath all the merriness, there is a misery to the lives of these suburban wives, who do their all for others and are rewarded with chronic doubts about their fidelity. Anxious Master Ford embodies a rising class, craving both wealth and respectability, for whom sexuality is tainted with shame and suspicion. Falstaff, with his pagan appetites and irrepressible impulses, oozes everything that the good burghers repress, and therefore must be at least symbolically subdued and cast out. That sums up the play’s main plot, as Mistresses Ford and Page (Kelli Fox) entrap Falstaff in his own lewd imaginings no fewer than three times and humiliate him with sadistic thoroughness, thus revenging themselves on the patriarchy and all its pretensions and double standards.

It’s a worthwhile subtext to explore, but Gaines has turned the work into the mushiest of Broadway musicals, eliminating the element of pathos that gives it force. CST’s stable of veterans (including, among many others, Kevin Gudahl as Master Page, Ford’s saner foil, Angela Ingersoll as the quick-witted Mistress Quickly, William Dick as village parson and funny Welshman Hugh Evans, and Greg Vinkler as village doctor/veterinarian and funny Frenchman Dr. Caius) acquit themselves like troupers, despite being frequently upstaged by the trio of highly endearing pooches. But by Act 5, the rapid-fire, cartoon-like action seems designed less to entertain the audience than to beat it into submission.

At one of many anachronistic moments in the play, a character quotes the old saw about American GIs in wartime Britain: “Overpaid, oversexed and over here.” Alas, the same could be said of this opulently raunchy, taste-free concoction. I for one found myself wishing to be elsewhere. (Hugh Iglarsh)