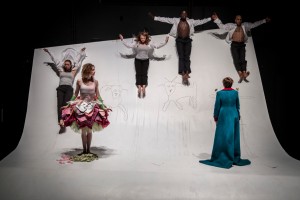 There are few stories as universally beloved as Antoine de St. Exupéry’s 1943 tale of a pilot who crash-lands in the Sahara Desert and meets a mysterious little prince from another planet. The love of this book comes with benefits and drawbacks when producing it on stage—your audience brings the excitement of seeing one of their favorite stories brought to life but along with that comes the fear that your vision will be different than theirs. At least (full disclosure) that’s the baggage I brought with me on opening night. And though I have a few minor quibbles with the script by Rick Cummins and John Scoullar and a few even minor-er quibbles with some of director David Catlin’s choices (why TWO characters with French accents?), I was more than pleasantly surprised by this delightful adaptation.

Working above, below, in and on scenic designer Courtney O’Neill’s deceptively intricate set (most notably, the central playing space is a large, rippling, off-white surface that serves to equally represent the rolling expanse of the desert and a crisp piece of readily available paper) this talented ensemble reveals more hidden talents throughout the course of this physically demanding show than a cast with such acting chops should be allowed to possess. Ian Barford’s endearing but serious and “grownup” Aviator is our narrator, seamlessly transitioning between talking to us and being engaged within the world on stage, and newcomer Amelia Hefferon is the titular prince. Both give performances that resonate with emotional nuance. The rest of the ensemble (Adeoye, Kareem Bandealy, Kasey Foster, Raymond Fox, Lauren Hirte and Louise Lamson) weave their way in and out of the story as the various symbol-laden characters that the Little Prince meets on his journeys.

Where this show truly succeeds is in capturing a huge portion of what it’s like to be immersed in the world of a good book as throughout the show the Aviator becomes increasingly involved in, a part of and connected with the stories the Little Prince is telling him. With him as our skeptical guide, we are allowed to be slowly drawn in as well. There are moments of extreme goofiness and creative show-offery that kids will love but there are also moments of reflection and emotional depth that adults can feel deeply. And watching Hefferon race around in what looks like a space-themed onesie and a blue and red jacket that’s just slightly too big for her (costume designer Sally Dolembo nailed it) is a joy for audiences of all ages. (Zach Freeman)