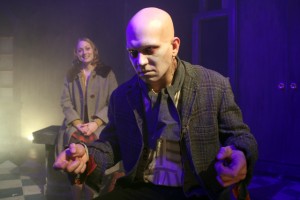 As numerous denizens of a nearby municipality aver, the titular Innsmouth is indeed a “queer sort of town.” As imagined by horror luminary H.P. Lovecraft, its secrets, when finally revealed, were enough to make a young man on an unintended night’s stay in the creepy port town faint dead away. “Can it be possible that this planet has actually spawned such things; that human eyes have truly seen, as objective flesh, what man has hitherto known only in febrile phantasy and tenuous legend?” asks the breathless narrator. This is heady stuff alright.

In playwright Scott T. Barsotti’s adaptation, making its world premiere at the Athenaeum Theatre via horror-centric company WildClaw Theatre, this narrator is a young woman named Regina (the wide-eyed and ingenue-ish Brittany Burch) and, as she wanders this mysteriously desolate town on the East Coast, she is often quite literally breathless, inhaling a strange tincture to strengthen her weak lungs. The townspeople she encounters seem to be afflicted by some terrible wasting disease (Aly Renee Amidei’s makeup and mask design are stellar), stumbling along coughing and scratching at their open wounds.

And yet… where’s the growing sense of unease? Burch remains mostly unfazed by these encounters. Unfortunately, this makes it a bit difficult for us to feel uneasy, which is a problem. 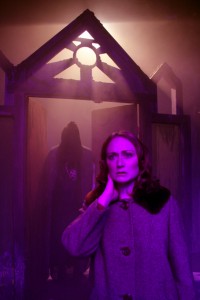 There’s a good deal of promise in this tale of ancient creatures and pagan cults but there’s a reason that despite Lovecraft’s popularity and undeniable influence, he isn’t adapted all that often: capturing his unique otherworldly visions is much harder than it seems. Barsotti has worked hard here to tell the full Innsmouth tale, but in doing so he is forced to rely on a few too many bouts of lengthy talking. And director Shade Murray does Barsotti no favors, passively staging these talking sessions so that the newly revealed information falls flat. It doesn’t help that Mikey Moran’s sound design (a nice palette of waves, birds and things that go thump in the night) is often cranked up louder than the dialogue.

There are moments of inspiration—the final tableau uses the full large cast as well as John Ross Wilson’s rolling set pieces in a visually stunning way—but this production flounders for too long getting there (at almost two hours and fifteen minutes with an intermission, this show is about twice as long as it needs to be). Trimming some fat off the script, particularly a much-too-lengthy monologue by town drunk Zadok Allen (a winsome Brian Amidei who grows unfortunately tiresome due to the length of his speech) at the start of the second act and minimizing some of the more broadly staged moments (an escape attempt near the end is confusingly and clumsily executed) could bring out the true nature of the horror in this story. In its current incarnation this show is less horrifying and merely a bit perturbing.

Lovecraft devotees may find more to love here than newbies, but they’ll also find themselves explaining the confounding narrative to the uninitiated once the lights come up. (Zach Freeman)