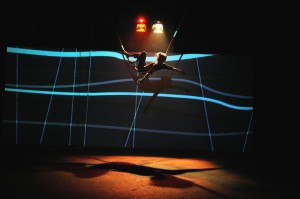 The release reads, “First of its kind in the U.S., the 2014 Chicago Contemporary Circus Festival brings shows from around the world together January 6th through 12th.”

If, like me, you are not the type to enjoy clowns and dancing elephants, make sure you read further; this is not your average big-top, “shiny shoe” circus. This is the circus peculiar to much of Europe, Quebec and a slow trickle in the United States, a circus unlike that of Vegas’ “Cirque du Soleil”—it is innovative, small, plucky and growing steam.

Curated by Matt Roben and Shayna Swanson, two mightily seasoned performers in their own circus-y rights, the Chicago Contemporary Circus Festival is the nation’s first contemporary circus festival. The focus of contemporary circus is to create artistically insightful and emotionally affecting work, such as one-man contortionist acts or late-night cabaret mime. This circus has existed in Chicago for years, but never has such a streamlined attempt been made to make the City of Big Shoulders THE city for circus; as Roben puts it, the festival is an attempt to make Chicago “the epicenter of circus for the United States.”

To accomplish this, the curators compiled a great variety of acts from the contempo scene. “We received a CRAZY amount of applications,” says Swanson. “Over 300 for the full-length shows and the individual acts featured in the cabaret. Then we watched them… all of them” and selected the best, most exciting work. “Contemporary Circus in the USA is still blossoming,” she admits, but it is high time to encourage the non-theater-going people of America to see the “whole other world” of this art form. For the curators, this festival is a “means to an end”—through entertainment, circus is meant to become a regularly accepted art form in the United States. 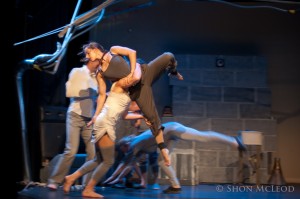 Some of these acts have already been accepted by the Chicago theater community, such as one favorite in the late-night cabaret series. “Chicago local Dean Evans is performing the bizarre clown show ‘It’s Honeybuns,’ which is definitely not a kid’s show,” Roben says with a caveat: it is very fun.

For an insider’s perspective, I asked Evans a few questions about his act.

How was the act “Honeybuns” conceived?
I was writing and performing in theater and my work began to get more and more interactive. My writing with the Neo-Futurists was largely audience participatory and I felt myself breaking away from them and exploring character-based work. My work in the realm of theatrical clowning was happening more in the audience and as I got older I felt like I had more of a message to deliver. Then I took a bouffon workshop… Bouffon has a high level of physicality and interaction and a strong foundation in satire. I was trying it out on the many stages in Chicago’s thriving variety scene. The flood gates opened up. I found the work of bouffon allowed me to be persuasive and seductive while still being incredibly silly.

I knew that I wanted to overwhelm the audience with deliciousness so they would embrace and fear me, like a pastry that is too sweet. So I made myself into a big, sugary custard with frosting and big blinking eyes. I chose the color yellow because it’s a very positive color and added the white ruff because it reminded me of frosting. The makeup is the makeup of the Koshari, Native American Clowns of the Hopi and Zuni tribes, who would mock and satirize people in their society in order to change them.

The character is in a constant state of evolution. I find every time I do a run there are costume changes and the character has evolved significantly. Openness and flexibility is required for the show. One time I wasn’t fully in costume and I heard my opening music. I thought we were doing a sound level check so I went on stage to make an adjustment and all of a sudden the lights came up and the audience was there. I thought to myself “Well, I guess I just have to talk to these people, and get to know them.” I improvised the entire show and it was my best one I had done. 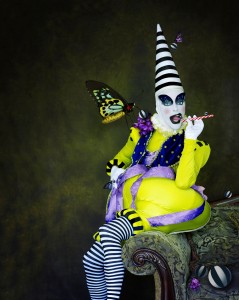 What do you think the core of the work is? What is the message that you’re talking about?
The core of the work lies in satire. You have to charm your way in. Make people laugh and adore you. Then you can deliver a message and mock. Make them laugh at themselves without knowing it. A bouffon is sometimes referred to as the anti-clown. With a clown, the joke is always on the clown. With a bouffon, the joke is on the audience.

After about a year or so I noticed that I was drifting away from traditional bouffon and I just decided to let the show be whatever it wanted to be. So I don’t even know if it’s a bouffon show anymore. I think it’s just Honeybuns.

My message can change, but in the beginning it was a lot about sexuality. I think many Americans see themselves as very sexy and open with their sexuality. But in reality they can be quite narrow and puritanical. Even hip artists. Heck, especially artists. Now, there’s some political stuff in the show and it’s become more of a celebration, which is why I think it’s perfect for a circus festival. To me, a circus is a celebration.