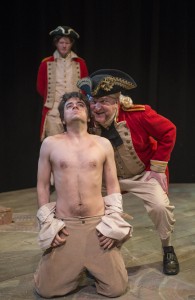 In his writings on punishment, German philosopher Immanuel Kant stressed that punishment must fit the crime and that the criminal should not be used as a means to the state’s end. If left up to Kant, Australia would have gone unsettled. Early Australia was a British penal colony, populated by criminals desperate to escape the hangman’s noose, often for relatively insignificant crimes like prostitution and petty theft; the unfortunates were forced to serve the Crown as slave labor.

Timberlake Wertenbaker’s chronicle of forced emigration explores the issues behind the prisoners’ struggle, sex as power and commodity, and the redemptive power of the theater. Shattered Globe’s ensemble tries to keep up with the important scope of the show, but its execution sometimes misses the mark.

Second Lieutenant Ralph Clark (an upstanding and empathetic Steven Peebles) hopes that the production of the restoration comedy “The Recruiting Officer” will restore morale and instill a respect for culture. Clark’s notion is met with strong resistance by Major Robbie Ross (a suitably thuggish Ben Werling), who views the idea as pandering to the needs of subhuman criminals who don’t deserve the luxury of culture. Convicts Mary Brenham (an affable Abbey Smith), Dabby Bryant (a steely Christina Gorman, embodying the independent spirit of the convicts) and Liz Morden (Eileen Niccolai, a good thing in a small package) audition for the piece, as the convicts warm up to the idea that culture is for everyone, not just the wealthy. Their duty haunts the soldiers; midshipman Harry Brewer (a talented Drew Schad navigating a demanding role) is persecuted by the ghosts of those he ordered executed. Throughout the colony, the hypocritical administration enjoys the pleasures of the female convicts’ “criminal” behavior.

The piece itself showcases longing and passion, but the ensemble’s energy isn’t always up to the task. The show’s double-casting necessitates onstage costume changes that drag the pacing down. These characters travel thousands of miles away from the only home many of them have ever known, and their loss, anger, fear and resentment seems missing from the overlong first act. The tempo picks up as the convicts explore the play and their sense of hope revives, but the show’s emotional low points are not well-established. The script offers salient comments on class and culture, but the ensemble can’t back the poetic language with emotional intensity. (Lisa Buscani)