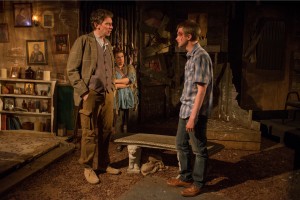 “No one saves anyone!” one character adamantly declares to another early on in playwright Zinnie Harris’ parable-cum-family drama that takes place on the side of the tracks (or in this case, the bridge) where clean water is scarce, telephones only work on Mondays and houses are collapsing into the muddy landscape they’re built in. In short, it’s not the kind of neighborhood you’d want to spend much time in. That is, unless it happens to be your home. Or if you think there might be some precious minerals in that mud… then you might just decide to raze it to the ground—whether the inhabitants are there or not.

The struggling every-family we’re centered on here is made up of god-fearing candlemaker father Michael (Lawrence Grimm, grim and steadfast), ailing but caring mother Therese (a stoic Kirsten Fitzgerald) and confused and conflicted son Adie (newcomer Andrew Cutler). Each member of the family is dealing with the pressure and danger from the better-off other side of the bridge in their own way: Michael retreats further into his strongly held pacifistic religious beliefs and Therese settles for old-fashioned denial. But young Adie, witnessing and experiencing cruelty he doesn’t understand, seeks violent retribution (“Language never changed anything,” he says in the confident tone of a child who believes himself a man).

For anyone who hasn’t thought too much about the destructive power of war, greed, religion, racism or nationalism, there are plenty of heavy themes here to dig into. For those who have, though, moments in this show may all seem a bit too familiar. “They hate us. We pray. They kill us. We pray. They bulldoze our houses. We pray,” says Michael to his angry son, by way of explaining the pacifist route, just before Adie furiously retorts that the other side prays too. There are precious few comedic moments and Harris seems to use them less to break the tension and more to remind us that these situations are no laughing matter, as characters tell each other in various ways to take things more seriously: “It’s not funny!” or “Don’t laugh!” they tell each other. 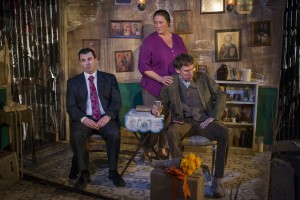 But despite the heavy overtones there is something strangely captivating about the world that director Karen Kessler has carefully created out of Harris’ slightly convoluted script. As the actors move across the humble desolation that is Joey Wade and Aaron O’Neill’s three-part set, it’s easy to get sucked into the trials and tribulations faced by each character, even if it does feel—for the most part—more theoretical than literal.

Aside from the aforementioned family members, there’s estranged brother Thomas (Steve Schine), who pulls up in his fancy clothes now and again to attempt to convince the family to abandon this dangerous, disenfranchised piece of earth. There’s kindhearted Hannah (Meighan Gerachis) who offers solace to all three members of the family in different ways. There are the troublemaking neighborhood kids Sol (Kevin Matthew Reyes) and Jean (Danny Luwe, hitting the right balance of sniveling and threatening). And then there’s the enigmatic Sita (Sarah Price), alternately contemplative and gesticulating, like a wild cross between Scout in “To Kill a Mockingbird” and Max from “Where the Wild Things Are.”

Each of these characters gives us a different perspective on the unravelling conflict and getting so many viewpoints gives Harris different angles to present her overall message. Still, in the end we’re left wanting a bit more than a cautionary tale of escalating violence. (Zach Freeman)