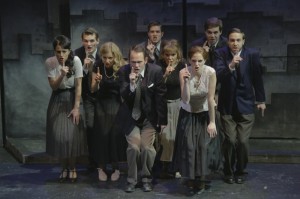 After watching this smart and entertaining production of “Sweet Smell of Success, ” it was a surprise to learn that the Marvin Hamlisch-penned musical (adapted from the classic 1957 film noir scripted by Clifford Odets) flopped on Broadway in 2002. Perhaps it was seen as too cynical and disturbing for the just-post-9/11 period.

But the bad timing has long since worn off. Under John Glover’s taut direction, the show stands revealed as more than a period piece about a Walter Winchell-like gossip columnist (called J.J. Hunsecker here, played with reptilian menace by Brian Rooney) and his toady, Sidney Falco (David Schlumpf, whose golden voice—which needs no miking, Director Glover—presages a bright future). Without the fedora and clipped radio voice, J.J. could be of our own time, a combination Rush Limbaugh and NSA, sucking up celebrity dirt and turning it into opinion-forming power.

“What makes the world go round?” ponders J.J. in a philosophical moment. “It used to be love—now it’s the word.” Specifically, J.J.’s own word, his sound-bite seal of approval that a particular joint is really jumping, or that a new ingénue really has It. Getting into his column is a matter of life or death for nightclubs and chanteuses, and for the swarm of publicity agents they hire—and despise. “It’s a dirty job I pay for with clean money,” protests one discontented customer.

Despite an occasional moment of humanity, no one is more transparently despicable than the opportunistic Falco, who early on sings of being “always on the outside, looking in.” His driving ambition is to be J.J. Hunsecker, the gatekeeper of fame, rather than just another fawning supplicant. A twist of fate brings the two together into a partnership that would seem to be the culmination of Falco’s sordid little dreams. But “freebies have a price,” as the chorus notes.

Even the J.J.s of the world have an Achilles’ heel, which in this case is his much younger half-sister Susan (Victoria Blade, all pampered entrapment). J.J.’s smothering protectiveness borders on the incestuous, forcing her to keep secret her romance with jazz musician Dallas Cochran (an appropriately earnest Nathan Gardner). Sidney is assigned the unsavory task of derailing the relationship. The rest is gritty noir-style denouement, as J.J.’s web of lies and betrayals begins to unravel. 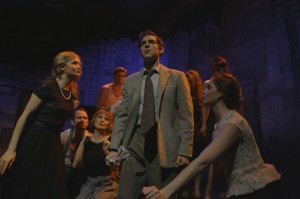 “You are a national disgrace,” announces Dallas bravely to J.J. in the drama’s climax, thus condemning the whole media-celebrity machine, which appeals to our worst instincts and fosters a culture of voyeuristic, finger-wagging conformity.

While nothing could match the sheer, dark perfection of the 1957 film—with its meshing of icy Burt Lancaster and oleaginous Tony Curtis, its rat-a-tat pacing and its artful James Wong Howe black-and-white composition—the musical is about as edgy and ambiguous as the medium gets. Acting, musical direction (courtesy of Aaron Benham), and choreography (by Steven Spanopoulos) beautifully combine to evoke an outwardly gorgeous but toxically cynical glamour.

By the end we see the young Sidney as a film noir Horatio Alger, his quest for self-betterment revealed as a Faustian pact with the devil, easier to enter into than to exit. In a world where trust is for suckers, the old virtues are so many liabilities. “What does that mean—integrity?” wonders J.J. “A pocket full of firecrackers, looking for a match,” answers Sidney, in one of many classic bits of gonzo Odets dialogue.

Underneath the sweet scent of career success sniffed by the too-smart-by-half Sidney Falco is the fetid aroma of fascism, of relentless propaganda exercised on behalf of a paranoid, reactionary agenda. Elegantly directed and energetically performed by its fresh-faced cast, this 1950s time capsule turns out to be a precisely aimed cautionary tale for our own era. This time around, may it find the audience it deserves. (Hugh Iglarsh)