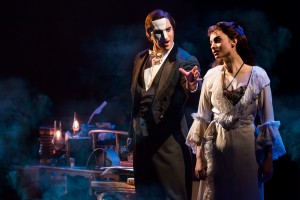 For all of its Goth and grandeur, Andrew Lloyd Webber’s “The Phantom of the Opera” is at its heart a “Beauty and the Beast” love story unspooled in unabashedly Romantic fashion via Lloyd Webber’s lush, aria-laden score. So through-composed is the piece that it has always been an opera, i.e., sung story with virtually no spoken word, even if few may have noticed since we have been hearing it done by “show” voices for more than a quarter of a century now.

Thus, for all of the hype surrounding Cameron Mackintosh’s “spectacular new” production of “Phantom,” the biggest difference between the Hal Prince original that, astonishingly, is still playing on Broadway and on London’s West End, is putting the “opera” back in “Phantom” in that the principals in the new version are trained voices with polished vocal technique. Given the demands of the score, this is good news and the work benefits immensely. Indeed, this is the best-sung “Phantom” that has come to Chicago.

That said, there is also the matter of chemistry, and alas, there is little to be had between the Phantom (Cooper Grodin) and Christine (Julia Udine) in this production. They sound glorious together, but we don’t buy for a minute that they feel a thing for one another. For all of the attention spent on redesigning the sets and effects for a new millennium, this is one show where finding leads that together are more than the sum of their parts is crucial for maximum audience involvement.

Not helping matters is redefining the Phantom as a graceful, swashbuckling and dashing figure, a miscalculation that began with the mediocre movie version of the musical that has carried over to this version. It strains the narrative as we are always left to wonder what Christine could be feeling for the Phantom’s bland rival Raoul (Ben Jacoby) given that in Act I, at least, the Phantom comes across in this version as a gregarious guy who happens to like half-masks and capes, almost more superhero-like than social outcast. In the original production, the Phantom was an awkward, mysterious and frightening figure. More troubling here is that by Act II, his Act I swagger has become monstrous without motivation.

Yes, the crashing chandelier is bigger and better than ever, but the serenading boat ride down to the Phantom’s lair without the flickering dance of candles is greatly missed. “Masquerade” no longer features the countless mannequins mixed in with the crowd coming down the stairs. Also lost is the Phantom’s ability to break up the party with a frightening death’s head Red Death costume that was a clear nod to Lon Chaney in the original. The big new effect is that the Phantom materializes miniature Molotov cocktails when provoked or cranky. (Dennis Polkow)