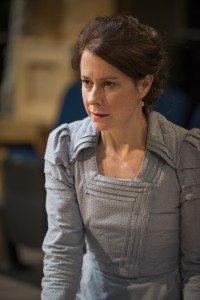 That the most famous image emanating from a Norwegian mind, Edvard Munch’s “The Scream,” is an existential wail seems appropriate for a land where darkness weighs so heavily, both in nature and in the soul. The eighteen-hour winter nights seem to foster a surplus of brooding about the meaning of life, of boredom and of alcohol-fueled therapy offset by a surplus of social cheerfulness by day (so say I as an American of three-quarters Norwegian ancestry). Though Munch’s enduring image was created a few years after Henrik Ibsen’s play, its spirit resides forcefully in the main character of “Hedda Gabler.”

The scream rages internally in Hedda Gabler, one of the most complex, fascinating characters in theater, yet in Kate Fry’s masterful performance in the Writers Theatre production, we hear its muted presence throughout. Crafted more than a century ago in Victorian Europe, Hedda is as modern a woman as any creation today, a newlywed completely disenchanted with the mores of her gender’s supposed predilection for homemaking and bearing children. She has contempt for the very idea of love. The only hint of passion in Hedda’s world comes via the troubled intellectual Eilert Lovborg: they are soul mates manifesting in opposites: he out of control, she always in control, he a social outcast, she carefully holding onto certain small social formalities even as she rejects the larger expectations of the world in which she lives.

Hedda deals with her boredom as a provocateur, craftily creating interpersonal dramas that she’s willing to push to the point of destruction. Kate Fry’s Hedda Gabler is a handsome, elegant woman of outward social grace; it is testament to her performance that we’re as charmed by her as all the men and women in her life are. It’s easy to imagine an actress slipping on the character’s ice and sliding into a portrayal so monstrous that the communal desire to woo and to please her rings false. 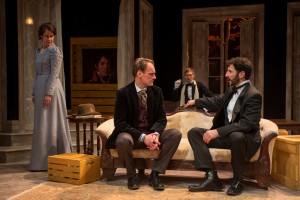 Kimberly Senior’s direction allows the superb cast to do its thing, bringing out the wit of Nicholas Rudall’s translation of a play laced with very somber messages, and allowing the intimacy of the Writers Theatre space to draw the audience in very close to the characters (the tradeoff being that, inevitably, some lines are spoken with a back to a part of the audience, frustrating mostly because so much of the power of Kate Fry’s performance is in her face, in subtle intonations of emotion, of internal smirks that somehow manifest in her eyes and so on, such that you really can’t stand to take your eyes off of her.)

It’s got to be quite a challenge to occupy the same stage with such a force of theater (on paper and, in this case, in production) so it’s a testament to the cast that it manages to do so. Sean Fortunato is perfectly charming as Hedda’s earnest, striving-to-please but comparative simpleton of a husband and, as the aunt who raised him, Barbara Figgins does a fine job of being both somewhat smothering and oblivious at the same time. Scott Parkinson’s Judge Brack is just as creepy as he needs to be and, as the muse-lover to the troubled Eilert, Chaon Cross manages to mirror Fortunato’s steadfast earnestness quite nicely. Mark L. Montgomery is very effective in bringing out the repulsive self-destructiveness of Eilert, but perhaps less so at conveying the magnetic pull he has over these women. Or perhaps that’s the point: the charm is not in the man, but in the chaos he brings to entertain an otherwise bored-to-the-point-of death world. (Brian Hieggelke)