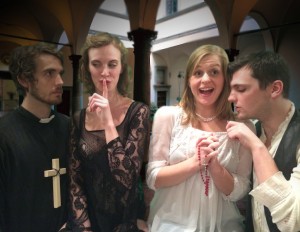 I have a near-weakness for Mandrakes. I’m astonished the original four-color superhero was based on an actual magician named Mandrake; the first Linux distribution I ever tried to wirelessly surf the web with was the now-defunct Mandrake; and I even have the debut Deep Purple album featuring the ditty about the hallucinogenic root. But, I’ve never read a single Mandrake comic strip, I couldn’t get the Linux install online and Deep Purple didn’t hit their stride until three records later when Ian Gillan joined. Compared to these halting experiences, Commedia Beauregard’s staging of Machiavelli’s “The Mandrake” really took me to completion. In fact, it took me all the way to a happy ending.

That’s about the level of rampant innuendo in this updated production of Machiavelli’s satirical retelling of the Rape of Lucretia. In its day, and debatably for centuries beyond, “La Mandragola” was a biting indictment of the church and the ruling House of Medici. For the contemporary viewer far removed from ruling houses and all-powerful holy primates, this version comes off as a general swipe at all humanity; the depths we’ll plunge to satiate our desires and the lengths we’ll go to justify our actions.

At Raven Theatre, Christopher Kidder-Mostrom’s translation employs language that places the action sometime in the early sixteenth or late twentieth century… or beyond all at once. While no one says “Oh, snap!” one unseemly disclosure does lead to a muttered “TMI.” It’s all quite lighthearted and since the updated language doesn’t aim for any au courant targets, the plot in which all players (besides Lucrezia, since the scheme is tantamount to her rape) conspire in takes precedence over any sense of satire. Unfortunately, the humor, without any blistering contemporary slights or insights, isn’t caustic enough to make a romp about rape hilarious in 2014. Despite the howls from the other characters, it’s barely funny to hear a bamboozled geriatric describe how he guided the duplicitous unsympathetic protagonist’s shaft into his otherwise chaste and previously weeping wife. In fact it’s mostly pathetic and even a bit flat. For such salacious material to have impact it needs to shock, and the charge simply isn’t there for an experienced twenty-first-century audience. The unspoken, perhaps unspeakable, irony of this whole enterprise is that it is devised under the pretense of bringing a child into a world of despicable people who prey upon the very innocence children embody. 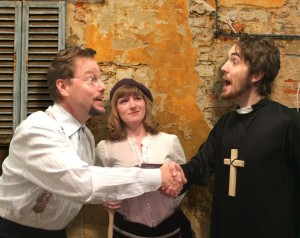 Director Lisa Cantwell’s cast is engaging and lively, their comic timing precise in both the incessant line delivery and the intermittent physical slapstick and the pacing and comedy hit a higher gear after the intermission.  The indie folk stylings of the balladic commentary from Matt Beard’s Friar Timoteo and Lina Chambers’ Young Widow are the unexpected sole source of dramatic tension. The initial use of music (starting with the whole cast joining in a sing-along introducing the show) is carefree. But soon the recurring duets between the friar and the widow take on an ominous, almost rueful tone as they reflect upon the moral implications of the events which transpire. The lyrics for these musical exchanges provide the most searing and poetic text of the entire show. Beard also makes the most of some of the funniest lines in the play, delivered in a convincingly offhanded, seemingly improvised manner. The other performer to garner consistent laughs is Ellen Cribbs as the conniving and immoral matchmaker Liguria. Cribbs makes the anachronistic blend of dialogue flow together so well that the undefined era of this show feels very lived-in and immediate when she’s inhabiting it.

The costume design, by Arin Mulvaney (who also plays the eventually corrupted and finally deceitful Lucrezia) leans sixteenth century but hints at modern intrusions—for instance in the frocked Friar’s choice of sneakers. For the most vaudevillian physical bits, Mulvaney clads the participants in overcoats.

Without pushing “The Mandrake” further—much further—into tastelessness and modernity, a contemporary revival feels ultimately unnecessary: strangely too tame, yet still offensive in its portrayal of the simpering lead character Callimaco enlisting the whole cast, and by extension the audience, in his vile maneuvers into Lucrezia’s bed and heart. This slightly contemporized Machiavelli could use some further revision, perhaps a flourish like renaming Mandrake Root to Mandrake Roofy since the plot undeniably hinges on coerced sex. Nonetheless, Commedia Beauregard has mounted an entertaining production of “The Mandrake.” I was left considering how offensive it is to be not nearly offensive enough. And that’s likely a more lasting impression than a funnier revival would leave. (Raymond Rehayem)