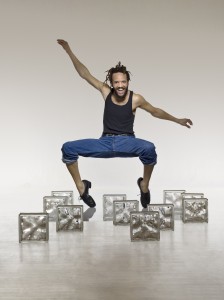 Some of my first memories of watching dance are of me developing my first crush on a very young Savion Glover—a regular on Sesame Street who taught Mr. Snuffleupagus to rap and tap or who lightly soft-shoed while Elmo mastered tying his shoelaces. Glover has been a legend since the age of ten, the protégé of Gregory Hines, Tony-winning star of “Bring in ‘da Noise, Bring in ‘da Funk” and probably the most famous tap dancer alive. Now, at the age of forty, Glover has an eponymous production company, dozens of high-profile choreographic credits (including both “Happy Feet”s) and a new evening-length show touring the country. STePz brings hoofers Marshall Davis Jr and the ensemble 3 Controversial Women on stage with Glover to pay tribute to dance and music heroes including Stevie Wonder, John Coltrane, Gregory Hines and Steve Condos—a mentor to both Glover and Davis. There will also be a Saturday afternoon performance of the kids-oriented “Glover & Friends” as part of the Harris Theater’s Family Series. (Sharon Hoyer)