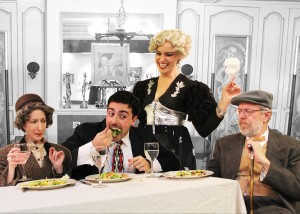 Hollywood awards season is in full swing, and any theatergoer looking for a little extra Tinsel Town fix will find some old-school glamour in MadKap Productions’ “Mr. Shaw Goes to Hollywood.” Mark Saltzman’s 2003 comedy, loosely inspired by famed Irish playwright George Bernard Shaw’s 1933 trip to California, plays out more like a flat screwball comedy from cinema’s golden era than an informative historical recount of Shaw testing the waters of the movie world.

The show begins with Shaw (Bill Chamberlain, delivering his observations of L.A. with droll gusto) and his wife Charlotte (Anita Kallen, speaking with a gentle kindness that comes in handy when she has to put out her husband’s verbal fires) surviving a crash landing on a Malibu beach. As part of a world-tour vacation, the Shaws have agreed to stop by the MGM studio where company head Louis B. Mayer (cigar-chomping Michael D. Graham) has invited the duo to a luncheon to spark up some publicity. Turns out Mayer’s pal, newspaper titan William Randolph Hearst (Tom Cassidy), is invested in the meeting with hopes to court Shaw to sign off the rights for a film adaptation of “Pygmalion” with his mistress Marion Davies (Cat Hermes, in pouty-faced sex kitten mode) taking on the lead role. “Why are we shouting?” Mayer asks Hearst as they debate potential casting for the film before the Shaws’ arrival, a question that should be addressed to director John Nasca, whose cast seems to equate raising vocal volume with instant humor. 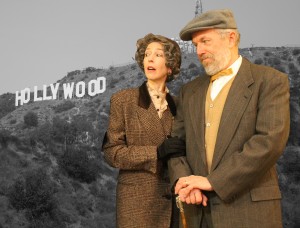 The first act drags as the Shaws make their way to the MGM lot at a snail’s pace, encountering a carefree UCLA student oblivious to the Depression-era woes of the rest of the country and a bumbling studio security guard on the way. In addition to Hearst, Davies and Mayer, the luncheon brings together a notable array of thirties Hollywood bigwigs including John Barrymore (who famously received a written takedown from Shaw for cutting scenes from a London production of “Hamlet”) and Clark Gable (a humorously suave Rob Ibanez who can’t quite resist sneering his dialogue like Rhett Butler rather than the man who actually played him).

For the incredible body of work to Shaw’s name (plays like “Mrs. Warren’s Profession,” “Major Barbara” and “Candida” remain fixtures at theaters across the world sxity-three years after his death), his dedication to Socialism and investment in numerous social causes, the play is ultimately more concerned with stirring up some zany trouble for its iconic supporting characters rather than maturely questioning why a man like Shaw would be so hesitant to release the rights to his work. The luncheon finds Mrs. Shaw enjoying a few drinks too many with Barrymore, Hearst and Gable battling it out for Davies’ affection and food flying, all while Shaw observes, unimpressed. Fish-out-of-water farce wins in the end.
Shaw took home an Oscar once “Pygmalion” hit the big screen (without Davies in the cast). The late theater legend would likely prefer you to spend an evening reading one of his classics rather than watching this silly show. (Michael Mellini)