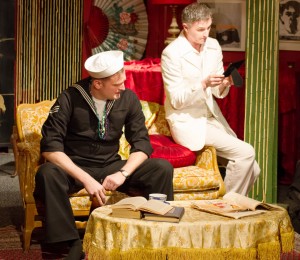 Legendary director Elia Kazan once said of Tennessee Williams “Everything in his life is in his plays, and everything in his plays is in his life.”  This insight proves prescient when applied to The Hypocrites production of three of his lesser-known one-act plays.  Presented back to back to back (with each play ending with just a jolt of an introduction to the next), the plays mine the same themes of his better-known work (mortality, sexual predators and self-delusion to name a few), but with a bit more creative flourish. It would be hard to imagine, for example, Marlon Brando suddenly breaking out in song (this is exactly what a brutish sailor does in the similar-to-“Streetcar”-feeling first play).  Not only are these touches entertaining, they also help the viewer gain better insight into the mindset of a true American theatrical genius. Not every outside-the-box wrinkle works as well—it is unclear why in another play the lead character is reduced to swinging ape-like across a series of suspended rings—but one gets the sense that within these plays Tennessee Williams gave himself permission to experiment a little.

Director Matt Hawkins provides a deft touch in linking these three plays together, literally taking the audience from stages set in New Orleans to a London boarding house to a Northeast hospital ward. Patrick Gannon, the protagonist in all three plays, is constantly impressive, whether playing an aging N’awlins transvestite, a British man unable to use his legs or a young man facing his own mortality.

The first play (“And Tell Sad Stories of the Death of Queens”) features aging French Quarter transvestite Candy doing her best to be sugar daddy to roughneck Karl (a very convincing Joseph Wiens). Self-delusional to the point that she puts herself in danger, all Candy really wants is to be loved. What Karl wants is anyone’s guess but violence seems a possible conclusion to every scene he is in. Within the cozy confines of the Chopin Theatre’s basement café/stage, the play is almost startling in its immediacy as well as in its sexual tension.

Following that play is the less enticing “The Remarkable Rooming House of Mme. Le Monde.” Set in the attic of a boarding house from hell, a crippled man named Mint is reduced to pleading with an old college chum for some restorative tea while at the same time having to swing across the room by suspended rings. Other indignities suffered by Mint include frequent sexual assault by the landlord’s son as well as his friend’s apparent indifference to Mint’s plight. Although clever in parts, it feels too metaphorical to be truly entertaining. Snatches of pop music (such as The Rolling Stones and The Cure) liven up the act and Mary Redmon’s performance as the off-kilter Mme. Le Monde is sure to put a chill in anyone’s spine, though audience members may be left scratching their heads at the play’s conclusion.

The final play, “The Big Game,” serves as the logical conclusion to the project. Brief and without any true surprises, the play nonetheless works as a soothing meditation on mortality.  Faced with a congenital heart condition, young Dave (Gannon) bonds with a vibrant football star (Joseph Wiens, in a startling transformation from his earlier portrayal of a violent alcoholic in the first play) and another, possibly doomed patient who counsels Dave to look to the stars for mental escape. Whether these relatively obscure works will ultimately prove to be as enduring as his better-known works has yet to be seen, but “The Tennessee Williams Project” is certainly a project worth undertaking. (Noel Schecter)