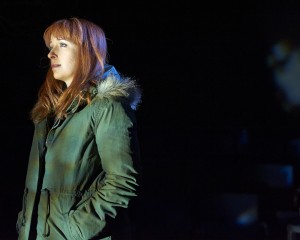 In 1968, eleven-year-old Mary Bell was convicted of strangling two toddlers, shocking the English public and forcing them to re-evaluate their attitudes toward rehabilitation and redemption for extremely young offenders. At what age are criminals cognizant of consequences? Can they be changed? Can they be saved?

Linda McLean attempts to explore these questions by deftly stripping away normal facades to queasy reveals. May (Sasha Gioppo), an overly tender woman, struggles with the world’s violence. She’s too concerned with saving others from pain, much to the annoyance of her bewildered husband, Dan (John Byrnes). She tries to investigate pain in an encounter with an online lover (Peter Moore) and a visit with a dying father (Sandy Elias). Each scene reveals more about May’s shocking past, leading to a tense conclusion where a social worker (Ian Paul Custer) struggles to determine whether she’s a fit parent. McLean’s vignettes can be frustratingly circular, taking their own sweet time getting to a horrible point, but the conclusion is usually worth the effort. She keeps the details of May’s crimes ill-defined, even in a meeting with a shell-shocked, complicit childhood friend (Andrew Burden Swanson), allowing the audience to think the worst.

Gioppo plays the role with a realistic, wide-eyed kindness that makes it difficult to believe her criminal past. May’s tender relationship with Byrnes’ charming, relaxed Dan makes normal life seem possible, just as the tense encounter with Elias’ spiky, moody father explains her roots. Custer and Swanson’s characters are effective reminders of an unthinkable past she may never escape. But Gioppo’s scene with Moore is most appealing: two awkward, seemingly sweet people try to educate each other on dark impulses that don’t come naturally—until they do. The scene suggests the destructive urge in all of us, even the most assimilated.

Director Brad Akin’s innovative staging scatters play areas among trees and surrounds them with actual topsoil on Brandon Wardell’s topiary hybrid set, underscoring McLean’s emphasis on gardens and growing throughout the script. The show is a nod to our need to nurture and a fascinating exploration of what happens when some creatures grow up wrong. (Lisa Buscani)