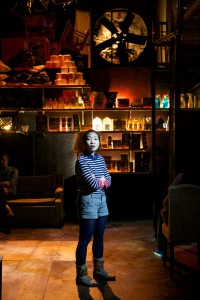 A production that aims to be gripping and unsettling from the start, Sideshow’s staging of “The Golden Dragon” grows more successful with every scene. However that’s not to say that it starts out successfully.

From the onset, Roland Schimmelpfennig’s script flaunts theater tradition. The most obvious stylistic flourishes are the casting of each actor in several shifting gender-/race-/age-defying roles, and the actors’ recitation of stage directions intermingled with their dialogue. The entire cast is expert in their handling of the various roles, and this approach serves to draw parallels and distinctions between the characters which otherwise would not be so pronounced. But rather than feeling daring, the inclusion of the stage directions as dialogue is immediately tedious and gimmicky as no insight is added by these announced directions. Yet as the play continues and we become more engrossed in the intersecting tales of migrant employment, domestic squabbles and sexual exploitation, these interruptions in the dialogue serve to distance us, the audience, from the horrors that mount—much as the majority of characters distance themselves from the moral violations they increasingly engage in.

Directors Jonathan L. Green and Marti Lyons pace the numerous subplots formidably, achieving a unified momentum that builds throughout. The main action, centered on an undocumented young male worker with an agonizing toothache, takes place in an Asian fusion restaurant and the frequently repeated multi-ethnic designation of the restaurant is the play’s first bit of absurdity. Throughout his dental dilemma, loud and very detailed food orders are placed. These urgent listings of endless ingredients in the face of such excruciating pain lessens the value of the human ingredients that constitute the whole of the narrative; this cheapening of human life by commerce is the main political thrust of “The Golden Dragon.” It is even more explicitly emphasized in the other main plot—the tale of another migrant worker first presented as an exoticised, degraded insect and later revealed to be an Asian girl forced into prostitution.

The weight of the mostly rotten world of “The Golden Dragon” is lessened by some comic relief, primarily emanating from one well-traveled, mostly rotten tooth. The tooth’s travels may turn you off to dining out, but the journey Sideshow Theatre Company presents in this complex production is one worth taking. (Ray Rehayem)