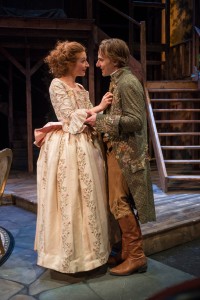 Poor Tom Jones: over-sexed and in love.  Tom has been that way since first being introduced to the public by Henry Fielding in 1749.  Since then “Tom Jones, ” perhaps the world’s first madcap sex comedy, has been the subject of three operas, a hit 1963 movie adaptation (which earned four Oscar nominations including Best Picture) and several plays, including this recent offering where the wenches, runaway wives and sophisticated ladies just cannot get enough of Mr. Jones.

This “Tom Jones” is presented in two acts, with the first primarily confining itself to rural England where we are introduced to the fatherless Tom Jones (Sam Ashdown). Squire Allworthy (played with mutton chops and a convincing British accent by Marcus Truschinski) takes in the little bastard and, along with his sister, raises him as his own.  Also living in the estate is the better-bred Blifil (played with effortless sleaze by Chris Amos), an Eddie Haskell type who revels in exposing Tom Jones’ indiscretions.

And there are no shortage of indiscretions here; this English hamlet is the type of burg often seen on late-night Cinemax.  In between dalliances, Tom professes his love to the very much interested Sophia (Nora Fiffer). But Tom, although a seemingly natural son-in-law to Sophia’s father Squire Western (played by John Lister, whose over-the-top antics amuse in every scene he appears in), is nonetheless a bastard.  Squire Western prefers she marry Blifil.  Sophia would just as soon be dead, and the budding lovers take separately to the road where Tom rescues a lady in distress, is seduced by two different women in one night and ends up having to sword-fight his way out of trouble.  Sometime during the night Sophia walks in on Tom’s nighttime entertainment and responds by running off to London.  The second act involves Tom searching London for his true love while also courting the upper class Lady Bellaston (Molly Glynn), who relishes in taking possession of this delectable young man.

There is a lot to recommend here, beginning with the cast. Although the accents seem to be all over the British Isles, the acting is otherwise natural and very seductive when necessary. Director William Brown is not afraid to emphasize the overt sexuality of the work and the sex scenes really sizzle. The script also allows for the cast to show off their comedic chops; Lister leads the way with his over-the-top portrayal of Squire Western. The cast’s frequent flirtation with the audience also leads to many laughs.

As the titular Tom, Ashdown exhibits plenty of raw sexuality. But outside of the bed (or wherever else he finds himself being wooed), Tom appears more wooden and stripped of that appeal. Scenes with the chaste Sophia (whom he makes no physical advances on) are devoid of any sexual tension. And without this chemistry, the viewer is left to wonder if Tom might not be happier with a different suitor.

There are also the inconsistencies in Tom’s character, with him sometimes portrayed as an innocent and other times as more than a little bit sly. This lack of consistency deprives his character of the chance for growth and the play is robbed of some much-needed narrative arc. One also does not have to be a feminist to question why Sophia should forgive Tom his many, many dalliances. At the play’s conclusion Sophia voices that exact thought, allows the question to hang for a moment, and then declines to provide a reasonable answer.  Maybe this would make Tammy “Stand By Your Man” Wynette proud, but on a cold wintry day in Skokie it makes for an imperfect conclusion to an imperfect play. (Noel Schecter)