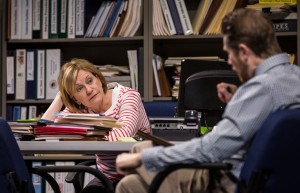 The best twists in a story are not those that reveal some new and unexpected turn of events but those that reveal something new and unexpected about a character. Something that makes you (or at least the really loud audience member sitting directly behind you) gasp sharply and whisper “Ohhhh noooo” or, alternatively, “Ohhhh yessss” at its revelation. Playwright Rebecca Gilman’s latest work, now appearing at the Goodman Theatre in a world-premiere production directed by Robert Falls, has many such moments. And in the tightly crafted world that Gilman has created and that Falls has brought to life, each realization hits the mark.

The titular Luna Gale is an infant, brought to an Iowa emergency room by her meth-using teenage parents Karlie and Peter (Reyna de Courcy and Colin Sphar) and promptly put into the custody of Karlie’s mother Cindy (Jordan Baker) by veteran social worker Caroline (Mary Beth Fisher). But when the overly religious Cindy pushes for full adoption with the help of her pastor (Richard Thieriot), Caroline begins to wonder if living with her grandmother is really that much better for Luna in the long run. Especially if Luna’s troubled parents can turn their lives around for the sake of their child. 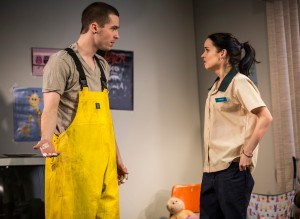 That a play asking—and attempting to answer—such serious questions about faith, family and the future of helpless children can be both emotionally resonant and painfully and consistently funny is a testament to both Gilman’s incredible subtlety and wry sense of humor and Falls’ no-frills direction. Each cast member so perfectly inhabits their character’s (admittedly flawed) skin so that no biting comeback or witty observation ever feels forced. The action comes across so realistically on Todd Rosenthal’s intricate rotating set that even the cycling through of scenery melds into the story, as we are transported effortlessly from hospital waiting room to shabby living room to generic diner silently and efficiently.

As a social worker with plenty of baggage (both personally and professionally) who finds herself in a moral quandary, Mary Beth Fisher delivers a powerfully nuanced performance that sets the tone for this fast-moving production and establishes solid connective tissue between the lives of the various characters and the effects of their choices (both past and present) on themselves and those around them. Sphar and de Courcy are superb as troubled young parents, walking a difficult line that allows us to believe that these two could (and want to) recover while also doubting their reliability. Similarly, Baker’s turn as a seemingly guileless grandmother-turned-adoptive-mother-to-be is multifaceted enough for us to buy her honest love for both her daughter and granddaughter while also questioning her motives. 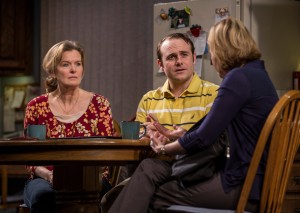 Richard Thieriot takes what could be a caricature of an evangelical preacher and turns him into a forcefully heartfelt, if slightly self-indulgent, man of the Word (with a capital W). His placating tone and oh-so-knowing smile are the kind of smarmy gestures that fill the coffers and get parishioners fired up about Jesus. Erik Hellman as Caroline’s deftly pedantic young supervisor Cliff is both off-putting and endearing as a committed bureaucrat and administrator with opinions that butt up against Caroline’s. And as a teen “graduating” out of the system, Melissa DuPrey embodies a teen more troubled than she wants to admit.

It’s a complicated and troubled world that these characters inhabit. And while Fisher’s Caroline makes only passing remarks about her heavy caseload and cut funding for rehabilitation centers and social work offices, Gilman uses the detail of this single case to paint a broader picture of life within the system: why people get into this line of work, how important the work is and, most notably, how very, very complex it can all become. No one is unconditionally correct here and there are no “right reasons” for anything, which is what makes this piece so thoroughly moving and believable. That it’s also hugely entertaining doesn’t hurt. (Zach Freeman)