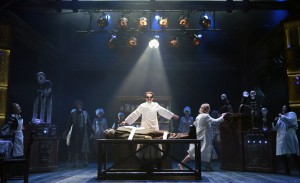 Surprise! Director William Osetek has re-imagined Mel Brooks’ “Young Frankenstein”—a musical based on the 1974 film starring the unconquerable Gene Wilder that was panned by critics during its Broadway run in 2007—into a fresh, non-stop, song-and-dance thrill ride at Drury Lane.

The story follows the familiar plot: Dr. Frederick Von Frankenstein (young Ethan Hawke-lookalike Devin DeSantis) has changed the pronunciation of his surname to “Fronkensteen” and become a Dean of Anatomy in New York. When his grandfather dies, he’s called to Transylvania to get back into the “family business,” grave digging and all. The show is fun and risqué, to the point of de-virginizing the good doctor and talking about the “enormous schwanzstuker” of the jolly green Monster (Texan Travis Taylor). Making full use of their nimble feet, Jeff Award-winning choreographer Tammy Mader gives these more-than-capable actors sequences that showcase their footwork and timing.

Both Jeff Dumas as Igor and Paula Scrofano as Frau Blucher play wonderful supporting characters. Scrofano carries Blucher’s hard-nosed, European ethos smoothly into song as well, particularly during one of the great numbers of the show: “He Vas My Boyfriend.” Allison Sill’s performance as Inga conveys the right amount of sex appeal and Scott Calcagno’s Hermit/Inspector Hans Kemp keeps the slapstick at a nice pace. There is plenty of room to go overboard, but the cast manages to carry off the silliness, the empathy and the tradition of “Frankenstein” with rich musical acumen.

Orchestra conductor Ben Johnson provides topnotch, seamless musical transitions with a particular percussive narrative that doesn’t overpower the choreography or the singing. The larger numbers work in concert, with the entire stage being used for both “Transylvania Mania” and the famous “Puttin’ On The Ritz.” Osetek may in fact have managed the truly impressive task of bringing this musical back to life. (Mark Roelof Eleveld)