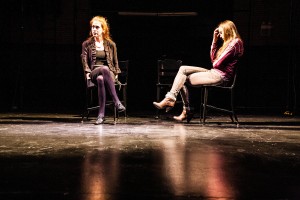 Written by Austrian playwright Ewald Palmetshofer (and translated beautifully by Neil Blackadder for this English-language world premiere) “hamlet is dead.  no gravity” is a dark, postmodern look at the meaning of life. Staged in a stripped-down church space with set design consisting of little more than some scaffolding, spotlights and four chairs, six characters alternate telling the audience their role in a past event.  Even this basic point is not readily understood as the disjointed narratives are slow to build a coherent story around a pair of siblings bumping into old friends at a funeral (all the while suffering the effects of a poorly cooked roast eaten at their ninety-five-year-old grandmother’s birthday party).  These are, as their mother points out, strange times where “the old have birthdays and the children are buried.”

In a play consisting mostly of characters talking to the audience, the most haunting soliloquies are given to siblings Dani (Amanda Drinkall) and Mani (Alex Stage). With Dani, it is as if Ophelia is finally giving voice to her failed love affairs (and in doing so vowing to never talk about this “love shit” again). Besides perfectly realizing each soliloquy handed to her, Drinkall delivers a mesmerizing performance that goes a long way toward humanizing this often-difficult-to-penetrate play.

Their mother, Caro (played brilliantly by Lona Livingston) echoes this sense of generational warfare as she openly pines for her own mother’s death. If her mother refuses to take a hint and shuffle off this mortal coil, what else is there to do but tie a rope at the foot of the stairs and wait for her to trip? Sitting in judgment of his wife is Kurt (played with just the right amount of menace by John Fenner Mays) who has a few secrets of his own. Doppelgangers to Dani and Mani are their long-lost friends Bine (Sarah Grant) and Oli (Blake Russell). More successful in love and life than Dani and Mani, they are also less self-aware of the true state of things (with life reduced to Bine’s favorite word, “coincidence”).

Director Seth Bockley deftly coaxes the most out of each character. Bockley also works to keep the audience off balance, opening the play suddenly and making liberal use of flickering strobe lights and loud, caustic musical interludes. This allows the final scene to be truly arresting in its simplicity. This search for meaning disguised as a play is not for everyone. But those willing to enter a church in order to ponder the meaning of a godless world will no doubt have plenty to mull over. And maybe the answer for “to be or not to be” is even more terrifying than the question.  (Noel Schecter)