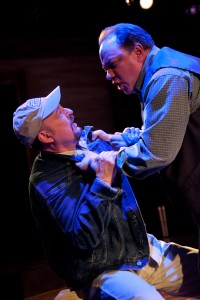 Things may not change quickly out in Colorado, but its citizens know how to adjust when it makes their community more livable; witness the state’s recent pot legalization. Eric Schmiedl’s adaptation of Kent Haruf’s novel chronicles rural Coloradans’ attempts to roll with life’s punches and captures their struggles with mixed results.

Unfortunately, Schmiedl’s adaptation of Haruf’s narrative fails to drive the town’s story; too much time is spent describing grubby living conditions in fleabag apartments. The tone of the piece is sweet and genuine, the relationship between Victoria and the McPheron brothers is particularly affecting, but the show’s issues and their resolutions don’t surprise or illuminate. Bries Vannon’s utilitarian direction of the ensemble’s sturdy performances on Buck Blue’s durable set doesn’t show us anything new. (Lisa Buscani)