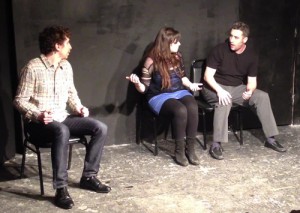 A visit to Theatre Momentum’s website describes their current production as “an improvised one-act play set in a single location.” As promised, the show consists of one continuous, real-time, forty-five-minute scene, with each player sticking to a sole character for the entire show. As an audience member, if you so choose, you are left to wonder just how much of the show is improvised: The entire evening? The basic plot? Certain plot twists? Just a bit of dialogue? I found myself not caring. As the company’s site also explains, “Theatre Momentum strives for work that is theatre that happens to be improvised.” As a viewer, I approached it as such. Unconcerned with the degree to which the show may or may not be improvised, I experienced the show as it was presented: unpretentious, conversational, casual, loose and, above all, humorous. The staging is simple, there are no props to speak of, and the performances could be taking place in your living room. It all results in a satisfying, enjoyable and rather brief evening of entertainment.

The story opening night centered on a pop band fronted by a gal who has had to boot out the drummer who’s also her true love because he’s not keen on wearing the eyeliner that the new, comically overbearing manager insists is key to the band’s burgeoning success. Unsurprisingly, interpersonal band politics follow (this isn’t “Rumours”-era Fleetwood Mac; it’s all pretty low-key and relatable) and the cast exploits the comic potential of the scenario with a disarming ease. Adam Hurst as the drummer who won’t sell out and Erin Monahan as the domineering and artless manager offered the most rewarding turns while the rest of the cast ably completed the scene. The show was so satisfying that I’m inclined to drop another ten bucks in a couple of weeks just to see if this band has topped the charts or if there are completely new occupants on the Porch by then. (Raymond Rehayem)