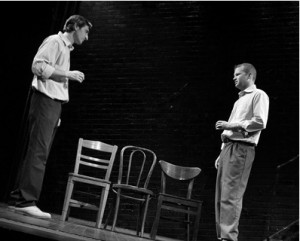 It’s late on a blustery winter night in Wrigleyville and aside from a few mounds of icy snow the streets are mostly empty. But inside the iO Theater there’s a line that bunches around the ticket window, the entry and the stairs to the second floor, as those who booked in advance pick up their tickets and others anxiously wait to find out if any seats will open up at the last minute.

“I’m just here on the off chance that a ticket might open up,” the guy directly in front of me tells me eagerly. On a sub-freezing weeknight when most sensible people are staying home and warm, this 11pm show is sold out, with a waiting list. And this is fairly standard for TJ & Dave, a duo of improvisers that perform in this slot every Wednesday night at iO and have been working together for more than a decade.

As with most improvisational shows, the setup is minimal—the lights go down, a song plays, the actors take the stage (a few chairs make up the entirety of the set). Wearing what might be described as “business casual,” TJ Jagodowski and David Pasquesi take their time before getting started. Jagodowski puts his hands over his eyes and slowly looks over the crowd with a knowing smile, while Pasquesi crisscrosses the stage in long strides, sometimes seeming to be rearranging the chairs, sometimes just roaming. They then introduce each other, say the infamous words, “trust us this is all made up,” and without a suggestion the show begins.

There’s a sense of calm that seems to descend on the two improvisers as they go about creating the initial scene. In fact, this calmness lasts throughout the show. It’s the kind of calmness that reminds audiences that they are in the hands of professionals and that they can sit back, relax and enjoy. There’s never a rush to a laugh line or a forced scenario. TJ & Dave may not be scripted, but the pacing is perfect. As the story unfolds before us (and before the performers as well) there seems to be a natural order to things.

The show I witnessed was a rather endearing coming-of-age story featuring two new college roommates meeting in their dorm room for the first time: Jimmy (Jagodowski), an affable, slightly cocksure PR major with a mini-fridge given to him by his uncle and Tommy (Pasquesi), a reserved Ag major from a small town. As new roommates do, the two got to know each other by talking about their interests, past and present. And over the course of the show, we saw the two already influencing each other’s behaviors as friends will do: Tommy starts saying things are “cool,” a phrase he’s picked up from Jimmy and Jimmy decides he likes banjo music.

The exchanges between the roommates were friendly and tentative, each feeling the other out for shared interests and idiosyncrasies; when Tommy revealed that his interest in agriculture stems from a desire to “save the country” with hemp, Jimmy was receptive but taken aback, both by the content of Jimmy’s outburst and by the change in his demeanor that talking about hemp brought forth. It was a memorable moment, revealing how nuanced the characters these guys create can be.

Aside from the roommates, three other side characters populated this mini-world: Rick (a hilariously too-forthcoming RA), Robin (a surprisingly forward girl from the Galapagos Islands) and Tommy’s dad (a stern, but understanding father who perfectly bookended the narrative arc by leaving a timid Tommy at the beginning and returning to discover a wholly new son upon his return).

Under the immensely subtle skill of Jagodowski and Pasquesi, it’s the little things that add up and make their shows as engaging and memorable as they are: early on in this show, Tommy decided that he just wanted to go by “Tom” but Jimmy declined to shorten his name. Later, when the attractive Robin showed up, Jimmy introduced himself as “Jim.” In this moment the audience could see a character growing, changing and discovering new things about himself. It’s not that no other improvisational shows have this, it’s just that these guys have perfected the delivery of these revelations.

There’s a reason this show has been running for so long and it’s the same reason that it will still be running years from now: TJ & Dave have the power to unlock an achingly funny secret world and guide the rest of us through it. (Zach Freeman)