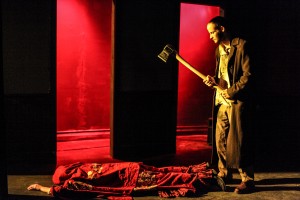 Sitting in the cramped, cold, charmingly tatty Angel Island theater space, it is not hard to enter into the nineteenth-century world of Raskolnikov, protagonist of Dostoevsky’s monumental novel of sin and redemption. Shivering in his tiny St. Petersburg garret, dressed in ragged clothing, Raskolnikov embodies alienation. His dreams are big, but his wallet is empty and his prospects are nil. Convinced of his metaphysical superiority over the herd of men and women, he is at the same time powerless, paralyzed, desperately alone. Raskolnikov was something new in literature: a criminal who is also a victim, and who, residing in the gray zone between madness and genius, sainthood and depravity, demands our close and sympathetic attention.

Ed Porter—high-browed, brooding, intense—was born to play Raskolnikov, and is the major reason to see this compact and compelling production. As pallid and attenuated as an El Greco saint, Porter is riveting as the conscience-stricken intellectual manqué who commits murder not out of passion or even necessity, but rather to prove a half-baked theory that the extraordinary man is bound by no law but inner necessity as he single-handedly pushes history forward. This psychopathic logic seems to be in line with the materialistic theories of Darwin and the unfettered capitalism reshaping Western society and culture in Dostoevsky’s time.

“Compassion is forbidden by science itself,” comments Inspector Porfiry Petrovich (ably portrayed by Jack McCabe), the affable but cagy policeman who suspects that Raskolnikov has murdered a local pawnbroker and her sister. He plays a philosophical cat-and-mouse game with Raskolnikov, pursuing not only justice for the victims, but also atonement and self-understanding for the perpetrator. “I feel a kinship toward you,” says Porfiry to the twitchily nervous ex-student, sensing that they are intellectual equals whose conflict has a cosmic significance. 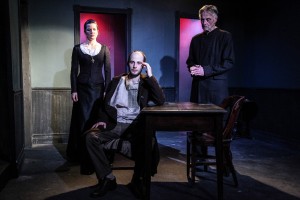 The third figure in the troika is Sonia, a streetwalker whose earnings support her otherwise hungry family. Maureen Yasko creates a memorable Sonia, capturing her beguiling combination of sensuality, spirituality and compassion. Sonia is Raskolnikov’s peer in urban misery, yet her religion protects her against the corrosive bitterness that is Raskolnikov’s constant companion. “God grants peace to the dead—but grants us, the living, nothing,” declares Raskolnikov to Sonia, in his arrogance not realizing that, having given away everything that is hers, God is all she has left.

It was Dostoevsky’s stroke of genius to turn a police procedural into an allegory of faith and a dissection of society and the human soul. Director Richard Cotovsky (assisted by set designer John Holt and lighting designer Claire Sangster) skillfully shifts between the sparse outer reality of proletarian St. Petersburg and the stormy interior landscape of Raskolnikov’s obsessive memories and self-accusation. Marilyn Campbell’s and Curt Columbus’ lucid, much-pared-down adaptation folds flashbacks and monologues into a rich and dense exploration of a twisted, self-lacerating consciousness.

It’s not a perfect show—Yasko is overstretched playing both the avaricious moneylender and the radiant Sonia, and McCabe’s genial inspector could be a bit more Tsarist official in manner and bearing and a bit less Lieutenant Columbo—but it hits hard and deep. Dostoevsky’s portrait of a man who lives entirely in his head and who substitutes abstract ideology for feeling and life experience is as troubling today as it was 150 years ago.

Raskolnikov’s isolation and confusion are ours as well, and his circuitous and humbling quest for connection and redemption, as enacted here, has much to teach us. “Your idea is something horrible, but you’re not,” says the wise inspector, who serves not so much as Raskolnikov’s persecutor as his confessor. He knows, as does the audience, that if there is hope for Raskolnikov, there is hope for us all. (Hugh Iglarsh)