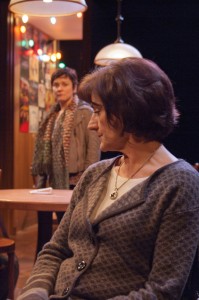 Two scientists—two women from two different generations—are talking about the evolution of human female anatomy and the conversation veers into the subject of love. The older, seemingly unsentimental Zelda (in a strong, poised performance from Janet Ulrich Brooks) corrects the younger, romantic Rachel (Elizabeth Ledo, seething and raw) that, according to neurobiology, love is actually just a form of stress.

That notion informs playwright Sarah Treem’s engaging two-hander, “The How and the Why,” in production at TimeLine. From its opening act set in Zelda’s office (designed like an academic shotgun shack of sorts by Collette Pollard), the emotional meter starts at about nine out of ten on the stress scale and never really lets up, through two acts of intellectually challenging dialogue about evolution—especially as it relates to female reproductive organs and processes—career vs. family choices and, of course, love. Even though these two have never met before, they’re bound by biology and, by extension, by a developing love of their own.

The constant tension gives the play a somewhat single-note rhythm, and much of the structural character of the work, including a surprise revelation near the end that seems somehow not that surprising, is far less intricate than works like Michael Frayn’s “Copenhagen” that also weave together science, life, ethics and assorted other big ideas into a dramatic narrative. But there is something inherently fresh at work here, and that is drawn from the utterly female character of the work. Women as scientists are a minority from the outset of their career, and when they dare tackle topics so feminine in nature as menstruation (the title is derived from the nature of scientific inquiry: e.g., we know how women menstruate, but we don’t know why in an evolutionary sense), they do so at the risk of being marginalized. Ironically, stories like this are just as marginalized, deriving their freshness from a source we’d be better off without—the continuing diminishment of women’s concerns in the marketplace of ideas. Director Keira Fromm keeps things crackling throughout, leading a crew equally unique to theater: with just a couple of exceptions, the entire creative team for this production is female. (Brian Hieggelke)