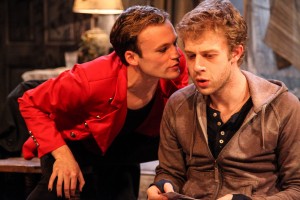 Ain’t no doubt, it’s a rough world out there. We’re surrounded by horrific events on a daily basis; it’s enough to make us permanently crawl under a rock. But we don’t; we find comfort in friends, family, faith and we keep plugging. But what happens when we lose the ability to stand toe-to-toe with the world? How do we survive?

Presley (Fred Geyer) and Haley (Aislinn Kerchaert) are siblings who have withdrawn, terrified by the city around them; they can only calm themselves by eating chocolate, taking drugs and imagining a world wiped clean by a nuclear holocaust. The twins are visited by brittle Cosmo Disney (Kevin Webb) and his performing gimp Pitchfork Cavaliere (Mark Lancaster); Disney embraces the nightmare, profits off of it, and luxuriates in recounting his horrifying experiences. Playwright Philip Ridley does little to clarify his desolate landscape; he makes references to absent parents and a life-changing trauma. But rehash after rehash of the things that go bump in the night couldn’t make me care about the characters or root for their survival. Ridley’s starkly beautiful language lays out a detailed world of ruin that taught me little I didn’t already know.

Major props to the ensemble for keeping up with Ridley’s language; Geyer, Kerchaert and Webb ably execute occasionally tedious monologues that could crush a lesser performer. Stephen Carmody’s juvenile desolation-in-twilight set captures the twins’ arrested development, and Jeffry Stanton’s staging keeps the action from becoming mired in the text. But the script gawks too long at the car crash to keep my interest. Redeem or result, but move on. (Lisa Buscani)