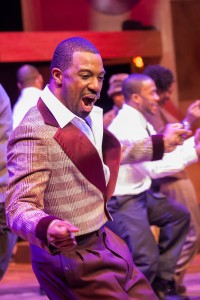 Walking out of the theater, I overheard a woman telling her companion, “even when I’m already feeling good when I get here, I leave feeling better.” That sums up most shows at Black Ensemble, but especially “Chicago’s Golden Soul,” a remount of director-writer-force of nature Jackie Taylor’s fifteen-year-old homage to a special era in American music and in our town’s central role therein. Or as a friend said to me at intermission, “They should just call this, ‘Take That, Detroit’,” since it makes a case for our town’s rivalry to Motown’s legendary era. A concert as much as theater, “Golden Soul” is structured as a series of vignettes introducing knockout song and dance numbers, many of which you’ll know and some of which you’ll be surprised to find out came out of Chicago, ranging from Betty Everett’s “Shoop Shoop Song” to Gene Chandler’s “Duke of Earl” to Dee Clark’s “Raindrops.” If you’re like me, your first order of business when you get home will be to create a Spotify playlist from the show’s numbers. With the outstanding house band taking an always-prominent role and a cast of many show-stopping (and standing-ovation garnering) singers, your Chicago pride will be beaming from this pure joy of a show. (Brian Hieggelke)