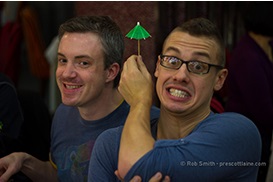 A casual setting and an enthusiastic pair of hosts don’t quite add up to what “Option Up!” is striving for, but it’s early going and there’s much promise in this new monthly event at Stage 773. Host Christopher Pazdernik and his comic foil, the versatile pianist Aaron Benham, present performers from current Chicago stage productions in a setting akin to a late-night talk show. Pazdernik riffs freely on theater happenings past and present and demonstrates a near-encyclopedic knowledge of musicals while Benham interjects with the occasional quip or anecdote.

Opening night featured a collegiate talent spotlight on Henry McGinniss, a capable and likable singer from Roosevelt University who’s currently appearing in Circle’s staging of “Edges.” The second guest was Lina Wass, a dynamic vocalist starring in “Ain’t Misbehavin'” at Porchlight. The evening’s attempt at a talk-show framework needs some polishing. The question-and-answer interplay with the first two guests could have been more fluid; a segment in which Pazdernik took center stage to largely lambast “The Pirate Queen”—which he’s seen three times—lacked bite. On the other hand, while I found Benham’s extended Carol Channing impersonation more reminiscent of Randy Newman than of the oft-lampooned lady (I’d never noted the similarity before!) it was earnest (and relentless) enough to amuse.

Where the show really shone was with the arrival of Cooper Grodin and Ben Jacoby, stars of Broadway In Chicago’s current “The Phantom Of The Opera.” These two, particularly Grodin, were at home in the guest chair and adept at making the sort of engaging and seemingly extemporaneous conversation that has made the late-night talk show format a TV staple. The duo also turned in an effortless and entertaining vocal duet.

Much of the crowd stuck around for the open mic afterward, and many of those remaining participated. This emphasized the talent-show vibe which permeated the preceding proceedings, though conversely each one of these open mic singers was worthy of a spot in the main show.

The hosts curated an impressive list of talent for one night. With a little honing of its talk -show trappings, “Option Up!” could evolve into a Chicago stage mainstay. (Raymond Rehayem)