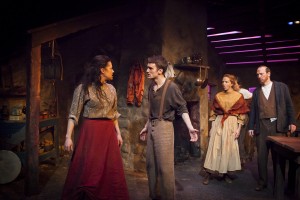 It has been more than a century since J. M. Synge’s dark comedy “The Playboy of the Western World” first debuted in Dublin at the Abbey Theatre. To say that opening night did not go well is a bit of an understatement, as audience members rioted in response to the play’s portrayal of Irish ladies. A few years later, a New York City audience threw rotten vegetables at a touring Irish production of the play.  Eventually the touring company was jailed in Philadelphia for daring to stage such an immoral play.

Although not shocking by today’s standards, the plot points are still enough to give one pause. Set on the desolate western coast of Ireland, the play centers on young Christy Mahon (Sam Hubbard), a mysterious stranger who claims to have murdered his own father. The locals quickly take to the young lad with fiery bar maid Pegeen Mike (Jen Short) and the Widow Quinn (Sarah Hayes) especially smitten. He is offered a job, clean clothes and a new lease on life. But things begin to unravel for Mahon when the town folk realize that he may not be exactly who he appears.

Everything on stage, from the accents, the stage design (Andrei Onegin) to the costumes (Alaina Moore), perfectly captures a remote, turn-of-the-century Irish village reduced to one pub set against a relentless, chilling wind. Director Michael Menendian showcases an excellent ear for the poetic quality of this slightly subversive script. Because of Menendian’s quick pace, the play feels much shorter than its two-hour running time. The American ear may not always pick out every word on stage, but this is still a black comedy for more than those who like their pudding black. Instead of being content merely showcasing a piece of history, Menendian instead brings to the stage a carefully thought-out, modern-feeling play that is nonetheless authentic to another time and place.

The cast is superb as well with Hubbard’s Mahon leading the way with a very physical and engaging performance. Jen Short (as Mahon’s primary love interest, Pegeen Mike) is equally as emotive and charismatic an actor. The script calls for an impassioned lady with “the devil’s own temper” and Short more than delivers.  Also excellent is Graham Emmons as Shawn Keogh, a quivering, self-aware coward who serves as a foil to Mahon, his more confident-seeming rival. Sarah Hayes (as the lonely Widow Quinn) also turns in a great performance and Lawrence Garner offers some later scene-stealing turns.  To tell whom he plays, however, would give too much of the plot away.

While this production will likely not cause riots in Rogers Park, it is nonetheless worthy of your attention. If nothing else, the perfectly recreated pub will trick you into feeling some warmth from the pretend fire. And like a drop of whiskey, the play’s material and its effect on an audience has improved with age. (Noel Schecter)