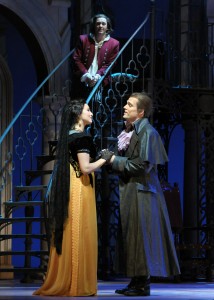 With a current Lyric Opera season so overstuffed with Italian warhorses, there is always the hope that when a company drags out the same works again and again, that something, anything, will at least provide a new perspective on a work so familiar.

Would that were so with Lyric’s new production of Rossini’s “The Barber of Seville.” As is the case with so many of general director Anthony Freud’s aesthetic choices, he likes to take chances, a good thing. But his track record thus far on doing so has been spotty, to say the least, and his habit of bringing in theater directors with no musical acumen to direct operas is already proving tedious.

Thus, Tony Award-winning director Rob Ashford is directing his first-ever opera with this production and even had such high-profile colleagues as Kenneth Branagh there on opening night to cheer him on in his new role.

What is utterly bewildering, however, is trying to discern Ashford’s perspective, if there is one, on this work. It is, of course, a comedy, but this is not a funny production. Nor does Ashford allow Rossini’s music, which tells you everything, guide what the characters should be doing in any given scene. The end result comes off more like caricature-like stage management rather than directorial vision.

It also means, oddly enough, that even the relationships in the opera are ambiguous, at best. If Count Almaviva is really in love with Rosina and vice-versa, you would never know it here. Nor is Figaro made to be enough of a character to gain insight into why he would be their matchmaker.

That leaves us with the singing, which is certainly serviceable throughout, but the closest thing we are given to true bel canto voices are mezzo-soprano Isabel Leonard making her Lyric Opera debut as Rosina and Italian baritone Alessandro Corbelli’s Dr. Bartolo. Baritone Nathan Gunn’s Figaro, which has become a signature role for him, is, at least here, vocally and dramatically bland.

Bass-baritone Kyle Ketelsen’s Don Basilio is a cartoon character and Canadian soprano and second-year Ryan Center member Tracy Cantin tries to make the most of Berta, even if she sometimes resorts to camp.

The most interesting aspect of this production is the Lyric Opera debut of young Italian conductor Michele Mariotti who, aside from a fumble out of the gate thanks to a wayward oboe in the Overture on opening night and some overpowering of singers and uneven balances, did manage to keep the music lyrical, spirited and moving along. (Dennis Polkow)