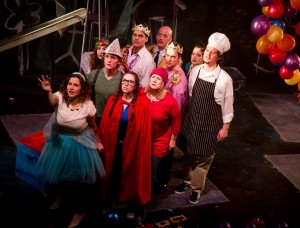 Opening a Stephen Sondheim show, even one of his most popular, two days before Chicago Shakespeare Theater’s Gary Griffin—the city’s unquestioned master of stellar Sondheim productions—puts up “Gypsy,” is either an act of savvy marketing or foolish bravado. But The Hypocrites, long associated with founder Sean Graney’s over-the-top zaniness, are maturing into a company adept at matching the  freewheeling creativity that earned their reputation with the ability to round up specialized talent and the discipline to deliver musical theater capable of working on its own melodic merits. They’ve proven so recently with a couple of Gilbert & Sullivan classics, but now show they’re far from a one-composer wonder. The Hypocrites’ “Into the Woods” is a wonder on its own: at once a faithful interpretation of Sondheim and James Lapine’s beloved classic—with some terrific voices and a small but sturdy cohort of behind-the-scenes musicians—that never loses sight of the Hypocrites’ signature sense of humor. The musical opens with the cast lollygagging on a stage set created by William Boles to look like a preschool classroom, a perfectly reasonable launching point for a story that mashes up some of the Brothers Grimm’s finest, from Jack and the Beanstalk to Little Red Riding Hood to Cinderella. The first act of this nearly three-hour production is especially suited to the Hypocrites’ style, with its overt blending of fairytale tropes that seems to sew up nicely at act’s end. But as we now know from a recent spate of television and movies, the fairytales were much darker than the versions mom used to read to us at bedtime, and the second act unleashes that dark side, with Sondheim and Lapine tethering that second journey “into the woods” to very adult themes including ennui, fidelity and mortality. Here the casting—excellent across the board, but especially memorable are Hillary Marren as the witch (and a few other characters; this is a show where actors handle several parts), Allison Hendrix as the baker’s wife and both the handsome princes (Will Skrip and Michael Brown, who camp up their characters in just perfectly charming ways)—carries us to a sober conclusion. It might just be a happy coincidence that host theater Mercury is now led by Walter Stearns, a longtime veteran of outstanding low-budget musicals as artistic director at Porchlight, but this show seems to meld the best of Hypocrites (notably director Geoff Button) with a cohort of guest talent and performers from Chicago musical theater (led by musical director Matt Deitchman). As to that chutzpah in the face of Chicago Shakes’ high-profile Sondheim production? Game on, Griffin. (Brian Hieggelke)