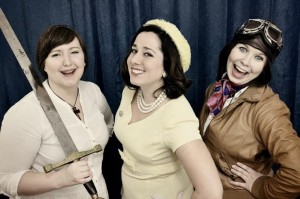 I would never wish ill upon great women of history Joan of Arc, Amelia Earhart and America’s beloved Jacqueline Kennedy Onassis. Nonetheless, I am glad they all died so I could enjoy their comedic gifts as presented from beyond the grave in “Dead Broads Yapping.”

Staged as a talk show from the afterlife, the evening’s hour provides the talented trio of Courtney Crary (the martyr), Caroline Nash (the aviatrix) and Marie Maloney (the First Lady) in a setting, à la “The View,” in which to dish and riff on current events and historical happenings as well as chat it up with other legends.

The show’s “producer” and our twenty-sixth president Theodore Roosevelt introduces the ladies and interjects throughout with frequently ribald asides. Taking breaks from the winning interplay between them, Teddy and the three Dead Broads each get a solo segment. The most successful of these, featuring fashion commentary from Jackie, uncoincidentally mirrors most closely the known interests and personality of the deceased dame it spotlights.

The guests change each week. The often hilarious highlight of the special sex-themed Valentine’s Day episode I attended was the interview with that other President Roosevelt and his cousin/wife Eleanor. This less glamorous First Lady could barely contain her fondness for Amelia while Franklin, a Lothario In Chief long before Jackie’s man ever entered the White House, brought down the house with an extended joke about his unsurpassable staying power in the Oval Office. The night’s other guest, Rasputin, attempted something none of the titular women approached—an accent—and milked his notoriously prodigious member for all the laughs it was worth.

All that, and participation prizes for a couple of lucky audience members. Not bad for three dearly departed gals and their equally expired guests. (Raymond Rehayem)