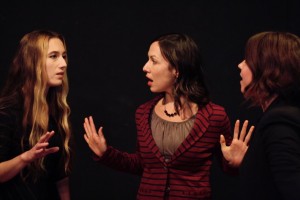 Billed as a play “told in a sitcom format” and split into four episodes/acts, “4PLAY sex in a series” thwarts formal expectations more than most sitcoms. The action, dialogue and staging are driven by the intersecting of societal and personal lines—between work and pleasure, gay and straight, science and sport and seduction, friendship and romance, art and life—and build impressively to a rewarding climax.

The script, co-written by cast members Graham Brown (who also directs), Nathan Faudree and Lisa Roth states the central notion of personal entanglement with a brief nod to quantum mechanics during an early interaction between one of the three pairs of lovers central to the play. The Infield Fly Rule, William Shakespeare and Cole Porter all come into play as well.

Commonly trite in execution, references to famous works of art (in this case, the Englishman’s “Much Ado About Nothing” and our fellow American’s “Just One Of Those Things”) are handled here with success, placed judiciously and accentuating our awareness of the play-within-a-play we are witnessing. Contributing to this success is the way these works are sampled, rather than merely being referenced or remarked upon.

Scenes cross between shifting groupings of the characters with playful ease; the dialogue almost always rings true and often merits laughter; and the moments of intimacy are achieved without hesitancy or mawkishness by a uniformly excellent cast.

One technique which blurs the lines between crowd and cast—having the stage lighting hit the audience nearly as much as it illuminates the actors—left me squinting at times. That’s not to say it was ineffective; there are moments when the characters are exposed (not physically exposed, though the show is called “4PLAY”) and sitting under the same light that shined on them made it easier for me to more fully relate.

This is the first time trip. has mounted a production outside of New York. Let’s hope it’s the first of many. (Raymond Rehayem)