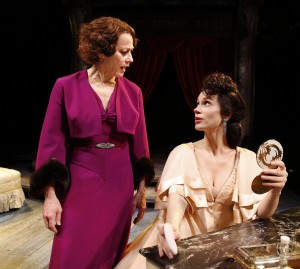 This production of “Gypsy, ” now at Chicago Shakespeare Theater, begins gorgeously before the first note, at the silent sight of the ornate gilded frame of a stage that promises showbiz is about to happen. Then, boom, it does. The production’s big brassy crackerjack orchestra delivers “Gypsy’”s spectacular overture.  It would be a fine concert piece in itself, if it did not tease the musical’s rich set of great, now standard, Jule Styne-Stephen Sondheim tunes.  Like the kids in the show who are ordered to “Sing Out!” by Madame Rose, the tiger-stage-mother who commands them, this production commits.  This must be one of the best-looking, best-acted and best instrumental stagings of “Gypsy” ever.

The show famously recounts the teen years of Louise, the future Gypsy Rose Lee, as her family, headed by the domineering Rose, travels the 1920s Vaudeville circuit. They’re a kitschy young children’s act composed of aging kids. The show revolves mainly around Rose and how her two daughters and loyal lover deal with, and ultimately reject her machinations. At first, the kids are played by real children. Small Emily Leahy as Louise’s headlining sister Baby June is a singing, tapping baton-twirling wonder. Caroline Heffernan as the young Louise/future Gypsy movingly conveys how being a normal, shy, smart child estranged her from her mother yearning for the family’s stardom. 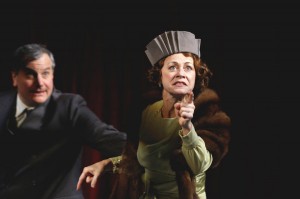 When the older Louise role is taken over, and prettily sung, by Jessica Rush, the girl’s transformation from ugly duckling to wisecracking glamor star is believable and touching. A comic trio of brassy strippers with hearts of gold could sell the show by themselves, after they nearly steal it with the endearingly bawdy “You Gotta Get a Gimmick.”

As Rose, Louise Pitre digs deep to deliver a relentlessly intense performance. Her acting is gripping, but oddly leaves one feeling the performance is more successful at showcasing Pitre’s stagecraft than it is at giving Rose life on stage.  Pitre, who’s an energetic, fit fifty-seven years old, does not fit plausibly into the role of a woman who in real life would be, literally, decades younger. Why do directors of musicals so commonly render the roles of mothers as if they were old—grandmothers, dowdy dresses, frumpy wigs and all? The real-life Rose was a very young mom, and her children struck out on their own when they were teens.

In Gypsy, much of Rose’s power springs not just from being bossy, but from her still potent, youthful sexuality. Ironically, one of the running gags in “Gypsy” is that Rose forces her aging troupe to play, unconvincingly, years beneath their actual ages. Pitre’s weathered belter’s voice would perfectly suit characters roughly her real age. It’d be thrilling to hear her nail “I’m Still Here” from Follies. Here, her vocals add to the anomaly. Part of the problem on opening night may have been that Pitre was painfully over-miked.

Other finely acted characters also fall short on their songs. “Gypsy” may have one of the best books in the history of American musicals, but musicals are first and foremost about the music. So much of the production soars, but the choice, with Rose, to put acting so far above singing, makes one wish this production had its own stage mother perfecting the tunes. Overall, however, this production is great show biz (about not-so-great show biz), done with commitment worthy of one of Broadway’s best musicals. (Ted C. Fishman)

I don’t really understand why directors of musicals so often nowadays don’t seem to consider the ability to sing an important attribute for the actor. Both acting and singing are of of equal importance (by design) in a musical and the lack of either dramatically (no pun intended) diminishes the performance. I was recently at a performance of Sondheim’s “Pacific Overtures” in Boston in which not a single person was a trained singer.